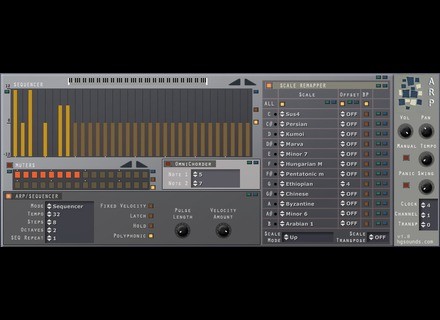 Homegrown Sounds has released version 1.0 of ARP, a polyphonic arpeggiator and note sequencer with scale remapping for sequencing possibilities.

Sequences can be re-mapped based on the played note so, for example, a sequence can be forced to fit to the major scale. The idea behind this, according to Homeground Sounds, is "to break away from the typical note sequencer where every key simply transposes the sequence." The ability to remap each note is designed to result in a more creative sequence.
The Muter Section is a gate sequencer which decides which notes will play. ARP is also polyphonic and so can be used as a typical Gate Sequencer, or as a polyphonic sequencer that syncopates. There is also the ability to offset the start note of each sequence so that when 2 notes are pressed together they automatically play syncopated, HS explains. Finally there is OmniChorder which allows triggering up to another 2 notes when one note is pressed to create a chord, this becomes interesting when used with the Scale Remapper which can leave you with a selection of interesting one finger chords, according to the company.
Pricing & Availability:
ARP for Windows (VST) is available to purchase for $20 USD.
For more information, visit Homegrown Sounds.