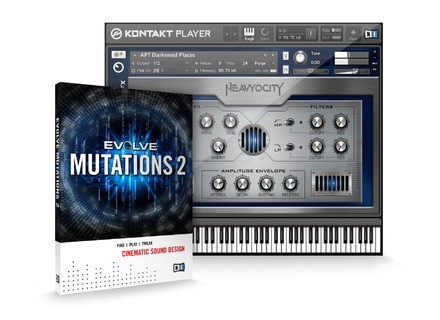 Evolve Mutations 2 is a software instrument created by Heavyocity that runs inside of Kontakt (or Kontakt Free) from Native Instruments. It is the sequel to Evolve Mutations 1, and a complement to the much larger Heavyocity Evolve library. It contains percussion instruments, melodic instruments (pads, leads, sampled acoustic instruments, etc), and stingers/transitions. The software is installed directly downloading it from the Heavyocity website or the NI website. Authorization is completed using the NI Service Center.

This software is super easy to use. It includes a bunch of loops that are simple to use and even tempo synch with Kontakt/DAW. The trigger effects are a valuable upgrade from the predecessor, Evolve Mutations 1. The Kontakt GUI was also updated, and looks very impressive. My impression is that the rhythmic loops in EM2 are more interesting/complex (or less repetitive) than EM1. I hear a lot more editing in the loops like stutters and distortions on individual hits in the loops. This makes the loops less boring to me.
The melodic instruments include some really good acoustic guitar samples that have been treated to have a cinematic flavor. There are also several acoustic piano instruments that have some nice effects applied. I really like how these instruments sit well in a mix with very little tweaking. The pads and synth sounds are a little weak in my opinion, and I actually like these type of instruments from the EM1 library better. There are some atonal pads that are pretty good for background ambience for movies, however they don't really go well with music that is in a particular key or has a melody because the pads are atonal.

Evolve Mutations 2 is a relatively small sample library of cinematic sounds. Although the original Heavyocity Evolve library is much larger (and more expensive), I think there are a lot of improvements in sound that the Heavyocity team developed since Evolve was released. EM2 is smaller, but has better sounds in my opinion. Unless you are a major film composer, EM2 has plenty of usable sounds to add a little cinematic flavor to you music.