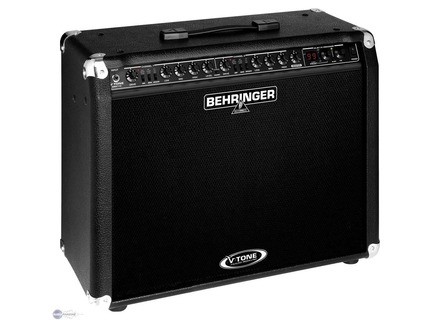 The GMX 112 is a 60 watt analog modelling amp with a Bugera speaker. It has all of the effects that a typical guitarist could hope to use along with 3 amp models and different gain types. Visually, it is a pleasant amp to look at. I has a "vintage" look to it and color coded led lights for reference in low lighting. The knobs and decal on the front look cheap but I never had a problem with them breaking.

On the front panel there are two sets of knob controls for drive, EQ (low, mid, high), and level for each of the 2 channels. To the right of these are controls for selecting and editing effects.

It is difficult to get what I would truly call a "good sound" out of this amp. The amp seems to be an all-in-one solution for a hobby guitarist on a budget wanting a variety of effects. I purchased it as a practice amp years ago when I was more inexperienced with guitar effects. It is very much fun to experiment with the different settings, though looking back I think options such as the Digitech RP series would have been better for its hands-on knob tweaking.

The GMX gets the job done however, and is so easy to operate that I never needed the manual for what I was using it for.

I really feel that this amp is a compromise in sound, and effects. You get many options but none are particularly amazing. That said I do enjoy the Chorus and Rotary speaker effects, they offer a decent emulation and are fun to play with. Every effect sounds as it should, but most are lacking in one way or the other as far as depth goes.

This amp neither excels at distorted and heavy sounds or acoustic and twangy. I always find I'm wanting more out of it, especially the amp models. The distorted sounds are pretty bad at higher volumes, and at the lower volumes they sound distant and withheld. I think this is in part because the amp models have a greater affect on the EQ than they should. I often have had problems where the gain doesn't seem to increase consistently, it will jump from one level to the next at certain intervals on the knob.

I ended up pairing a Danelectro EQ fish and chips pedal with this amp because I didn't feel like it had enough control over the frequencies.

I like how much you get for the price. It really is a good amp for a young guitarist who wants to play with effects and different sounds, or maybe in a lessons studio where a student may want to try something they heard on the radio just once. But I would never point a professional guitarist to this amp for performance or recording.

If you can even find this amp anymore, you can probably find it cheap. It uses the V-Tone sounds so any of Behringer's V-AMP series will have similar features for a similar price. I wouldn't pay more than $100 USD for one today.

If you are a guitarist who just wants lots of sounds to play with, you should be aware that there are many software that offer nearly limitless sound design potential at a pro quality for much less than most multi-effects units today. Try Natvie Instrument's Guitar Rig or a similar program. There are likely even demos to find one you like.

Like I said the GMX is by no means a bad purchase, but there are better options out there for what it does, such as Line 6 spider series and Digitech's RP.
Did you find this review helpful?yesno
Cookies help us improve performance, enhance user experience and deliver our services. By using our services, you agree to our use of cookies. Find out more.