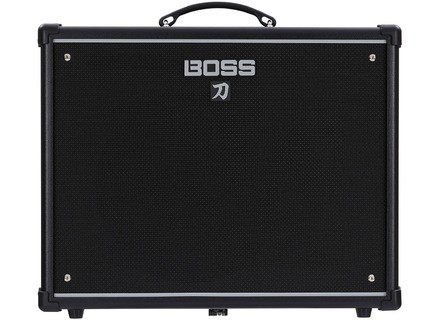 Value For Money : Excellent Audience: Anyone
View other reviews for this product:
I have owned the Katana 100 watt amplifier with 1 12" speaker now for a month,..I have warmed up to it slowly since getting it from fear that once again I would be disappointed with any amp I bought for under $500.00 that doesn't have tubes in it, I live and play around the Boston area and usually bring along a fender supersonic tube amp (when I really don't mind breaking my back for good tone) or if I'm feeling a bit tired I will bring my fender cyber deluxe (which has a few great sounds that can compete with some tube amps) to local gig's and open mic's. I have been playing guitar for about 20 years and consider myself a good guitarist who strives to have a very good tone every time I play,..its important to me.
I purchased my Katana online (Ebay) and bought it from a gentleman who bought it for a music school that realized it had bought to many amp's so this one had to go, the gentleman said he would let it go for $400.00 WITH the GA-FC footswitch included, it was new in the box warranty and all.
When I first got the Amp I was impressed with the way it looked everything seemed very familiar (unlike the fender cyber deluxe for instance) but the real surprise was when I plugged my vigier Excalibur with suhr pickups into it (ssh+,ssv),...not only did the amp SOUND and respond like a tube amp,..it FELT like a tube amp, which is very hard to understand if you don't play guitar, great rock and fusion tones are there (brown channel) as well as a VERY usable clean channel (I can hardly use any clean channels on the cyber deluxe because they just don't break up in a good way and spike in the treble way to much)after playing this amp for 2 hours the day I got it I didn't even want to LISTEN to my cyber deluxe never mind play through it, the Katana had a great sag to it, and the breakup and the compression on the clean channel sounded amazing and I haven't really even made it to the effects portion of the amp's capability which is incredible if you play open mics or small gigs and you don't want to carry a pedalboard around with you. The katana software is pretty easy to use if your a little computer savvy and have some patients the payoff is well worth it, it took me 1 hour to set up the software and start downloading different effects into my Katana (it would of taken a shorter time if not for having to update the katana which took about 1/2 hour) in 2 hours I had programmed my katana with 4 different sounds on all 4 channels and now it was time for the big test....
I took this amp to a big open mic blues jam we have here in town at a place called cellys pub in Lynn,ma its a big place with a stage and all. My setup took less than 2 minutes (which consisted of me plugging in my guitar, the amp,..then the foot controller,.I jammed on 4 blues tunes and this amp just killed, not only did I get compliments on the tone but I could HEAR THE DIFFERENCE easily, the number one thing for me about this amp is the DYNAMICS you can get out of it,...pick soft,..it sounds SOFT , pick hard and it produces a little good dirt,..amazing that I pretty much played the whole gig on the first channel (clean) used a built in boost to dirty it up and controlled a majority of the volume with my VOLUME knob! I never turned the master volume on this amp to more than 6, that was playing with another guitarist, a drummer, bass player, singer and harmonica player!!! the fender supersonic is a great amp (and it should be for $1000) but when I A/B the two,.. for the money,sound and all the effects you get not to mention the mobility issue the clear winner was the Katana, unbelievable value for the money, I recently have gotten back into shred and there are some great sounds there as well, no problem going from Paul Gilbert to danny gatton with this amp, the versatility, sound and thanks to BOSS a whole bunch of pedals for the right price ...$0....gets me thinking I got an incredible Deal, then I plug my guitar into this amp, listen and then I KNOW I got not only an incredible deal,..but an incredible amp.