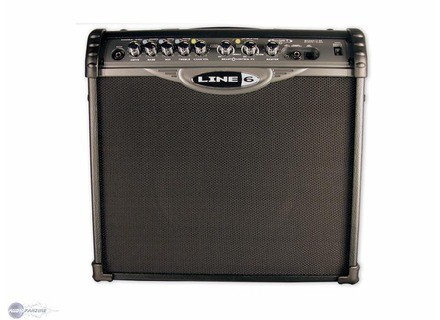 View other reviews for this product:
30 watt amp, perfect as a transistor amp and sentrain qelques occasions ... played in groups with a battery ......
effects (phaser, flanger / chorus, tmolo) 4 CHANNELS
tape echo, sweep echo, reverb
output record out, (for teachers of music Lampl great it may lack a second input for the guitar of lve) in this price range is line 6 (for me and many of my friends) the best amp system modlisations ....

Easy to use 50 buttons ia oci pa .....
but your cache line of wetsuits 6 s had fun hiding sounds like a boost by pressing several buttons at the same temperature ...

The clear sound good (pr a roland jc), channel 2 plutt an old marshall blues (`68) through the marshall, mesa boogie in a good channel 3, perfect for large rhythmic and channel 4, exclusive Line 6, the channel that the INSANE c to kill her, a gro c its fat as modern or rglages Plutos of the 80 ..
I play a Squier Stratocaster jarrive a pa sound like Zakk Wylde but fat very fat, the first time it surprises so be careful .... insane channel (it looks like a big boost with a disto Paisse tr)

Ca fai six months that the User jai g dfoncs ears ... we regret just a connection with the gro pdaliers shortboards type (not supported) in May with the type FBV4 ptits yes ... I tried many g of other models (Marshall, HK, fender super but with 4 channels (mostly insane) jai understood the bargain I had to do all g .. see the monster returns
See the source
Did you find this review helpful?yesno
Cookies help us improve performance, enhance user experience and deliver our services. By using our services, you agree to our use of cookies. Find out more.