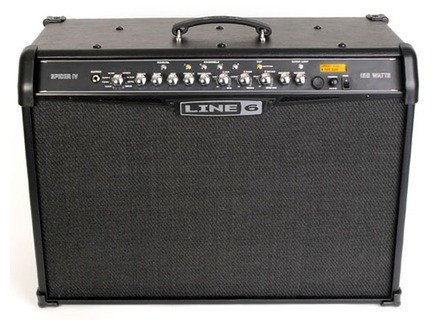 I am a fan of Line 6 and by no means is this review out of anything against them but these amps are just garbage. This amp is rated at 150 watts, which is a really loud amplifier and 150 watts of poor sterile tone. Nothing that I have heard from Line 6 as far as amps sounds has ever sounded good to my ears.

* 150 watts
* 2x12" Celestion custom speakers
* Three-quarter closed-back cabinet for a tight, snappy response
* 16 amp models masterfully dialed in by pro players
* Sparkling clean tones to high-gain metal tones and beyond
* 300+ hand-crafted artist-created presets dialed in by 50 world-famous bands and rock stars
* Almost 200 dialed in song-based presets giving you legendary tones from the 50s to today
* Jangly cleans, scorching distortions, effect-laden tones, and everything in between!
* Create, save and recall 4 complete amp settings with the push of a button
* Keep your hands on your guitar and switch channels with your feet using the FBV2 foot controller
* 20 brilliant and easy-to-use Smart FX (4 at once)
* Effect models inspired by celebrated stompbox and studio effects
* Bass, Mid and Treble knobs like the EQ controls of each modeled amplifier
* Drive knob, Channel volume, Master volume
* Built-in tuner
* Headphone output for all-night jamming
* High-quality direct-recording output
* CD/MP3 input

This is just a waste in my opinion. I like the way their effects sound and the way that their software is set up much like a real guitar rig, but the distortions and amp models are horrible! To me it doesn't matter what guitar you use with this thing it is going to sound nothing like the amps they are trying to recreate. If you must lay this amp then I would play it with a Gibson Les Paul or something with mahogany for the wood. Something dark and bold that will give some thickness to the tone of this amp.

The amp sounds thin and sterile much like a stomp box overdrive or distortion pedal would sounld like. You can hear and feel the digital process in the tone. This amp has no soul and no tone what so ever. It is a complete waste of resources.

If you want a mp modeler that has effects built in as well then go with one of the other Line 6 amps that Reinhold Bogner helped out with. They actually have a good usable distortion tone. NO wonder they went out an found a pro to do the dirty channels.

At new these amps come in at around $500. A bit steep for a trash sounding amplifier. I wouldn't recommend this amp to anyone. It doesn't sound good and you won't get anyone worth his salt to record it.
Did you find this review helpful?yesno