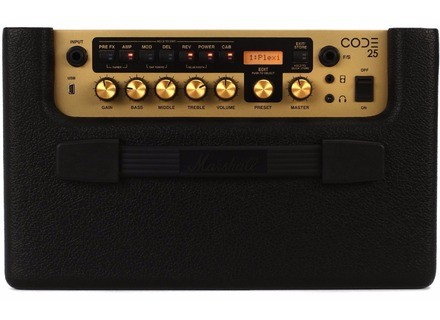 « Many sounds in a small, lightweight box »
4

Value For Money : Excellent Audience: Anyone
Buy this productView price information >
The title sums up why I couldn’t resist this new Marshall… in a 25-watt version.
First of all, it doesn’t take much space up – and when you add up several other pieces of gear space definitely IS a factor… Then, I won’t compare it with the original amps or cabs (I’ve never even heard the original models for some of them), but with other comparable small modelling amps which sounds seemed less natural. Of course, this small Marshall doesn’t look as good as its bigger brothers, but just listen to the presets and you will see how hard it rocks!!! Not enough still to play with a bass and drummer who deliver a combined volume reminiscent of a 747 airplane taking off, but if you want a pleasant sound while playing alone then it does the job…

Its other main asset is how modular the sounds are: pick your amp type, effects, mixing and cab style, and the CODE25 will provide you with a very nice modelled sound. It’s also a way to add to your sound panel when recording: keep the 50 or 100W tube amp you use live, and this tiny box will bring you additional sounds for studio recording on alternate takes…

As for the presets – well, there are good and bad ones, some sound very good as is, others will need tweaking to one’s taste… but that’s also what they’re here for.

I don’t really care about the connectors, I just put a mic in front of it for an old-school recording! Ergonomics is perfectible: since I don’t have a pedalboard controller I have to either turn the preset knob or modify the effects manually. A direct access through entering numbers would have been a great idea, but not too much to complain, especially considering the price as for under the 300€ mark you get a new amp that brings you several amp sounds.

So in the end I don’t regret buying this small secondary amp, which won’t prevent me from buying a big, “real” stack one day (I’m a big fan of old JCM900s) with its assorted 4x12… But maybe that’s a bit oversized for playing in one’s living room. So in the meantime, I’ll go with the CODE25…
Did you find this review helpful?yesno
Cookies help us improve performance, enhance user experience and deliver our services. By using our services, you agree to our use of cookies. Find out more.