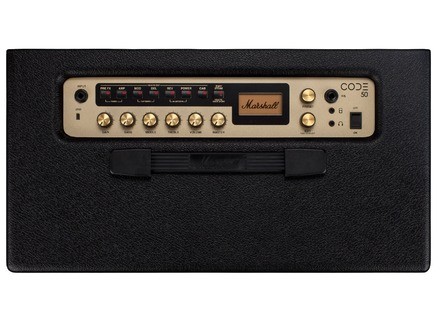 « A great amp with a nice Marshall sound »
5

Value For Money : Excellent Audience: Anyone
Buy this productView price information >
- What musical styles do you use this amp for?
Rock, punk, jazz-rock, reggae.

- Given its weight and power, is this amp feasible for practicing, rehearsing with a band, and/or using live?
Yes. It’s both light and powerful. Haven’t tried in for an outdoor show or in a big venue, but in all other situations the answer is yes.

- Are the clean, crunchy and distorted sounds suitable? Are the parameters efficient and effective?
You can choose from all kinds of sounds (clean, crunch and overdriven) and effects that get along with them (distortions, chorus, flanger, phasing, reverb, delay...). Of course, as with just any given guitar amp, the sound will of course depend on the guitar you use with it. Some sounds will be great with a Strat but only sound so-so with a Les Paul, or the other way around. Also, even with a same guitar, the sound will widely differ depending on the selected pickup. I’ve read some users claim this is a bad amp. I believe these people just don’t take the time to adapt the settings to their own guitar, and this is what makes all the difference. Considering the number of Marshall amps modelled here, you can only find something for you.
I’ve tried it with a Strat, an Ibanez Sabre FM540 (with Di Marzio pickups), a Telecaster and a homemade guitar. There’s always a great sound to be found depending on the pickup selected, though sometimes it will take a little tweaking.
In all cases, don’t hesitate to change some settings (EQs). The sound is sometimes a bit shrilly, just tweak a few settings and the amp’s sound adapts to your guitar. As for the settings themselves, they are really efficient and to save the change you’ve made all you have to do is press a button!

-What are the pros and cons of this amp?
I’ve been pleased to find the sound of my old JCM800 which I used to play with a Strat: this unmistakeable Marshall soundgrain, and a quite surprising string attack dynamics. It takes pushing the sound a little (1 or 1.5/10 at least). The 12” speaker provides nice low frequencies.

As for its cons, all of its sounds are not really useable, but it’s always a question of taste. If you like the Marshall sound, then go ahead, this one won’t disappoint and you’ll always manage to find sounds that suit you. It’s a real Marshall sound Swiss army knife, to be adapted depending on your guitar. Most importantly, TAKE THE TIME to tame it, it’s worth it!!!

to get a Fender Mustang IV, which has great sounds (clean, crunch and overdrives). I’ll keep it, but I haven’t found the same, so peculiar Marshall grain with it. So, as there was a great offer (reduced price for a set including the Code 50, a 4-switch controller, a d’Addario string set and a guitar stand for a total 236€), I decided to buy one again. Finally, I got this unmistakeable Marshall sound back!!!

Last but not least, now I can play in stereo using both amps