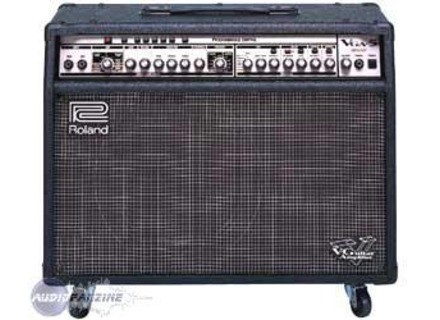 I bought this amp about 3 months ago. I needed something smaller to take to gigs and sessions (it was getting rather tedious to drag around a half stack everywhere). I got it from Sam Ash for around $450 with shipping costs.

The amp also has quite a bit of amp modeling features and effects built in, along with 11 saveable patches (more with the optional pedal board). I like the quality of roland's effects and the integration of effects and amp in one. The distortions and cab simulators are better than line6 amps at the same price. The knobs and pots are adjustable to very specific settings with no gaps or leaps in level as is common in many modeling amps.

The only thing I don't like is that the cab seems a little big. It is more the size of a cab for a 2x10 than a 1x12, but the casters help to compensate for the extra weight when moving it from place to place. The chorus settings are a little too "chorusy" unless the level for that is set pretty low. Other than that it's great!

The amp has a single 1x12 with 65w of power, which is plenty enough for the rehearsals and gigs I've been playing. There's no use in having a giant amp if it's just going to mic'd and put thru the house PA anyways. It comes with casters, too.

It's a solid, rugged amp, and is definately worth the money. You get many of the same effects you would find in the boss pedals/pedalboards and a great amp at the same time!