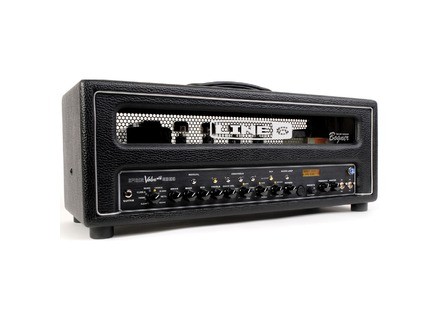 View other reviews for this product:
When I first heard this amp I was a bit skeptical but to my surprise it sounded pretty good. The 1x12 sounds terrible and the 2x12 sounds a bit better and this was was a hit.

Finally Line 6 got the idea...they cannot make a decent distortion tone. So they went out an found probably the best man who could create one. Reinhold Bogner has been building amps for over 20+ years now and creating some the best amplifiers in the world. Professionals around the world turn to Bogner to get their tonal needs.

Line 6 has done a great job building effects processors but really couldn't figure out how o get the overdrive down. Now that they have Reinhold and his world renown taste for high gain tone the have achieved something until now has never been done before.

I was at an amp festival when I first heard this amp and Reinhold Bogner was there telling us to listen to this amp and everyone thought he was joking because we know how Line 6 amps sound. They fired it up and it was a big surprise to hear how good this thing did sound. We tested it with a Gibson Les Paul and a Fender Telecatser and each guitar having its own personalty sounded very god through the Bogner cabinet.

If you are someone who needs solid sounding high gain amplifier with the ability to have multiple effects to go with it this is the amp for you. Having tubes coupled with the digital processors makes this thing a beast of a guitar tool.

At new these amps come in at around $900, not a bad price for something that was designed by Reinhold and mixed with the processing power of Line 6.