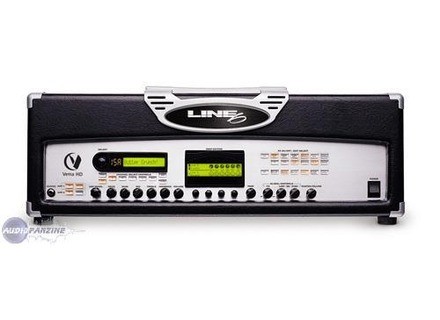 Value For Money : Poor
View other reviews for this product:
In summary:
- Amplification 200W transistor (it's really an understatement!) Which is actually a dual 100W (AC so moved that I have yet to exceed 15% of the volume without risking deafness!)
- A guitar input jack 6.35,
- Several simulation output mic / line ... but no headphone!
- Multi-effects processor (in fact it is the same as the PODxt) further comprising an amplifier simulator (very realistic) and a variety of high quality effects (no kidding ...).

Goodies:
- The power and quality of simulators,
- The digital effects, including reverbs monstrous
- The direct mic outputs (the resumption of distorted sounds on PC via table mix is ​​pretty amazing!)

Cons:
- No headphone (hello neighbors)
- No PC connection as the PODxt,
- It's almost too powerful ...

Setup is super simple - even me when I arrived ...
The 16 banks of four pre-defined sounds produce sounds very convaincquants just copy it in the bank use and modify at will. Honestly most of the factory sounds are used as Such - except one or two banks enough spaces.
The manual - also available on the line6 site - is very clear and short. In fact I did read that after work on the monster for a few weeks - that's how the ease of use.

I play a bit of everything - the hard, rock, pop, funk. And this amp covers my needs well. I have a Prestige Ibanez RS3120 and a Fender Strato US Standard. The Fender sounds a little weak, but it was also the case on my previous Marshall Valvestate 100 (it should be upgraded with the humbucker). The Ibanez sounds super pro, however - and this is not the only guitar I think.
The distorted sounds of trash can cover the most powerful in the most crunch blues - ca depend mostly on the guitar.
The clean sounds are pretty awesome too: the amp simulator works great.

In short it is absolutely the top.

I use the beast for 3 months. I hesitated with the Vetto Combo (100W), much cheaper but has the same mechanics. The HD with much more power - for those who have tried the combo it must be heard to be believed - I opted for the latter. I play with a Line 6 Cab 4 * 12 (412S-T 300W) that I produced an incredible bass response.
I tried the multi rocktron effect, but I found it too synthetic. In addition I would have had to pay me a stereo power amp as well, which would cost the same. I chose the Vetta HD and I do not really regret it. The price is high, I still paid the € 3400 for the HD, the cab and pedal but the investment is well worth it (the wallet).
See the source
Did you find this review helpful?yesno
Cookies help us improve performance, enhance user experience and deliver our services. By using our services, you agree to our use of cookies. Find out more.