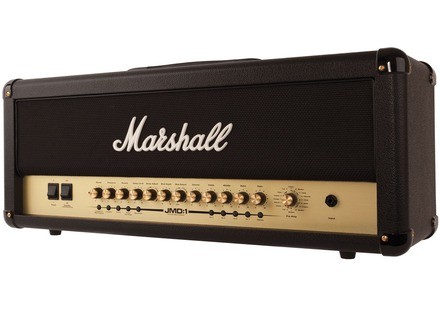 View other reviews for this product:
Marshall is been known for the great straight ahead rock 'n roll guitar amplifiers. They have been around for decades now have been pretty much the catalyst for most hard rock and metal bands. They've been used all over the world and pretty much every studio recording imaginable. This amplifier is basically a digital front end with a power tube power section. That means there are no preamp tubes in this amplifier but just to EL 34 power tubes. It's kind of a modeling amp and it does all of the tones that pretty much any Marshall amplifier could do. You have a modeling front and a power back. It gets pretty close to those tones but it just doesn't have that right feel and tone that you would get out of preamp tubes.


I'm a big fan of Marshall amplifiers because he really fit my tone in my feel towards a guitar. This amplifier just does not get it from me. It could be that it's made in China and I pretty much refuse to buy anything or any guitar amplifier or gear amde in China. Marshalls really let me down with his amplifier in a sense that they have successfully built their company with good quality components and hard work based in the country of origin but now that they're outsourcing some of their products just doesn't do it for me. You're pretty much going the way of Vox which is been a lacking and a disaster for about 10 years now.


At new you can find these guitar amplifiers right around thousand dollars but that's probably about $900 more than I would ever spent on this guitar amp. It's made in China and I would never buy this amplifier for that reason alone. Marshall if you want to keep business with me you can continue to make your amplifiers in the United Kingdom or else I'm going to switch over to plenty of other boutique amplifiers that do it much better than you were doing it now.
Did you find this review helpful?yesno