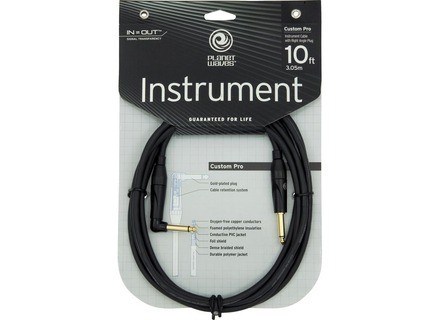 « Great instrument cable for those who don't make their own »
4

I bought a Planet Waves 20' Pro Custom cable back in June of 2010 because I needed a second one to run to my amp from my effects. Having used a cheap Livewire cable for over a year I knew that I wanted a cable that was actually decent, and that didn't break every month and a half. When I walked into my local music store of choice I told the guy there that I was looking to spend around $35 for a 20' cable, but I could go higher if needed. Turns out they were having a sale, so I walked out the door with this cable for $35, instead of the normal $50.

I've since used it as my main guitar-to-effects cable for over a year now, and it's worked great. I did notice a change in tone, there was more treble and presence in my signal now. Amazing what decent materials can do for a cable eh? It has held up very well, only crapping out recently, and really for no fault of the cable. To loop the cable around the rear strap button on my guitar I have to put a pretty sharp angle in the cable near the plug, and it goes over a fairly pointy edge of the guitar. But since Planet Waves has lifetime warranties on their cables, I was able to get it replaced for free. Well, almost, I had to pay shipping back to them.

You SHOULD be able to get it replaced from where you bought it at, but the owner of the store I got it from is a real hoser. "Well, what we typically do is just repair these..." Yeah, screw you. I'm not letting you fix my cable and then bill PW for replacing it... Shipping was like $5 and within a week I had a brand new cable in my hand.


Overall, I am very pleased with this cable. Would I buy it again? Probably not. I now make my own cables, because for $22 I can build a 20' cable using Mogami wire and Neutrik connectors. If I didn't though, all of my cables would be Planet Wave's Pro Custom. I highly recommend them if you don't build your own!
Did you find this review helpful?yesno
Cookies help us improve performance, enhance user experience and deliver our services. By using our services, you agree to our use of cookies. Find out more.