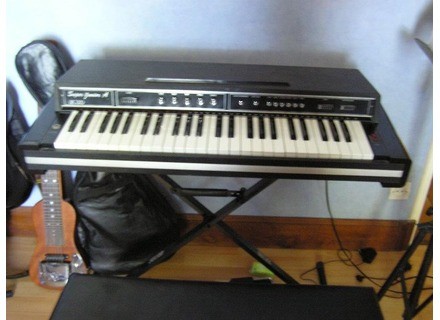 super junior a, Organ from Eko.

it is a synth of the 70, four octaves from C to C, hyper psychedelic sound, no connection except the headphone jack, analog is the question of polyphony does not arise, you can press all the keys at the same time!

Since this is an old synth, the little buttons on the facade give intuitive desire.

the sounds are quite what I want, psychedelic wish, I would even rounder. Light touch is really in cons.

for the record, my parents had to buy this keyboard (thinking it was a toy) in a flea market for 50 francs when I was 5 years. growing up, I passed on to a friend for a yamaha psr-250 (I'll sell). having grown up yet, I am interested in vintage gear, and I thought about this little keyboard that I managed to recover. after a whole weekend of repairs, he sounded the thunder! the "presets" (or rather waveforms) are combined and the result is impressive! short, it is not known asser over its capabilities ... damage.
See the source
Did you find this review helpful?yesno
Cookies help us improve performance, enhance user experience and deliver our services. By using our services, you agree to our use of cookies. Find out more.