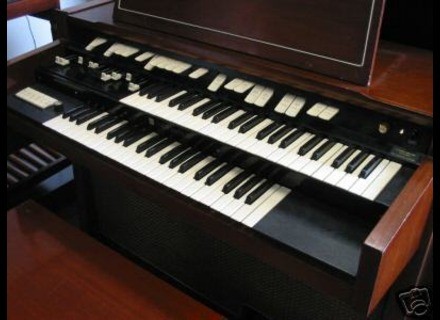 The T-Series is the latest in Hammond tone wheel, it is organ-like "spinet" (2x44 notes, pedal 13 notes), to transistors, for the time to market "home organ". Obviously, the features are a bit low compared to the standards of the brand B-, C-3 or A100. One set of drawbars for the keyboard, very annoying lack of 16 &#39;and 5 1 / 3&#39; below the keyboard, so unable to make the lower left hand (the offset of the upper manual limits its range in the bass), few presets, a zipper-like string bass pedal with the mono switch 16 &#39;/ 8&#39; and sustain, a set of percussion for upper manual, which does not match the percussion "standard" expected of a Hammond; a single connection to firm Hammond (now very rare), and an output phones unusable for a line out and then, gadgets that we could have done: cymbal and "brush" on the pedals, percussion repeated. on the other hand, there was a real vibrato scanner, such as the B3 (without names V-1, V-2, C-1, etc ...), and a good spring reverb on three levels. The keyboard is not waterfall, but type "diving board", it does not bother me too much, the touch is enough "slack" for glissandos. 130 kgs outsized within three (I have two, and my back still remembers).

This is obviously not an instrument for live (Tony Banks was used in concert, "Selling England" to "Duke", but there was a time when the groups did not hesitate to embark on their tours of pianos tailed, one wonders why Tony also did not take a more prestigious), unless the "portabiliser" by cutting it in two, to say the least delicate operation, and not doing with all these son. on the other hand, with a output jack (which I have not done), it becomes very interesting, it is often found in studios, personal or professional (currently the instrument tonewheel the cheapest market, with a score around 550 €).

This is where the debate gets interesting. Many people, giving in to their passion for Hammond, buy a "spinet" (for the price much lower than the models consoles) and are disappointed, it&#39;s partly me. The bad reputation of "spinet" Hammond transistor has its flaws and limitations described above, only the sound. On this point, the T102 has two major flaws of course objectives (without talk of the lack of bass in hand due to missing zippers). First, the lack of reversals in the upper register: past a certain height, the sound of a zipper stop running, while the consoles he took an octave lower, creating a phenomenon of accumulation when is mounted in the upper, with interference and saturation, which is causing the "scream" so typical of the B3 conducive to solo, while the T102, like all the spinet, loss of fisheries in the treble. Second, a series of filters at the preamp soften the sound, and reduce again the acute response. To remedy this, I highly recommend consulting the pages http://www.keyboardpartner.de/hammond/t-modifications.htm. I did that the first amendment: the sound is already much better, the frequency response more regular, treble found, the last audible click, and even though present in the grave. A third major gap, compared to B3, the amplification transistor, not lamps, in my opinion is not a default target, the sound will be simply less "dirty", warmer, has a different character. It is certainly far from a B3, but the sound of the T102 is quite lively, warm, even on the built-in speakers, the reverb is beautiful, vibrato Celeste I + II is excellent and very expressive. It is often said that without Leslie Hammond is worthless, and the rotary speaker is an essential part of his Hammond, many organizations prefer to play on a clone in a real Leslie Hammond as an amplified "right ". While a rotary HP transcends the sound of any instrument, electro-mechanical, analog or digital, but the tone wheels have a warmth and a quaint side interesting in themselves.

Here&#39;s the rub, we have seen is in the characteristics (normal for an organ to use "home"), which limit its use in a jazz keyboards and pedals limited, and especially the absence of occasions in the high - and not the sound itself. Although he did not sound "traditional" dreams of all jazz organist, he will find its natural place in a psychedelic or progressive rock, for example (and using that in fact Tony Banks is not The most interesting, I think).
See the source
Did you find this review helpful?yesno
Cookies help us improve performance, enhance user experience and deliver our services. By using our services, you agree to our use of cookies. Find out more.