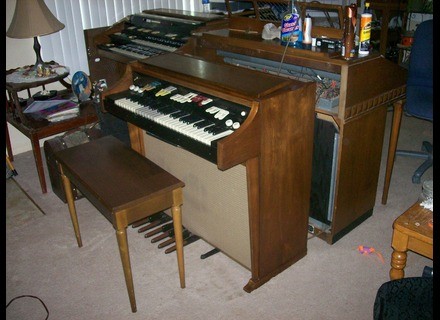 The Hammond ExtraVoice F-100 is a unique electronic organ that is unlike most other Hammond organs out there. I believe that this was made in the mid 1960's. We have one of these at the studio where I work, and it's definitely nothing like the B3 we have that often sits right next to it. There is one 52 key keyboard as well as a series of foot pedals as well. It has built in speakers and weights a whole lot, so I wouldn't recommend trying to use this for gigging! It is a fully polyphonic keyboard and doesn't have any pitch or modulation wheels.

It did take me a little while to get used to everything going on with the Hammond ExtraVoice F-100, and to be honest I'm still learning things with it. The basics are definitely easy to get a hold on, but figuring out what the best sounds are and what the best combinations are is a different story. It's a lot of fun to mess around with the ExtraVoice, so don't be afraid to try things out! The manual is put together well and should be informative for anyone who wants more information on this organ.

The Hammond ExtraVoice F-100 offers up a few different emulations of different acoustic instruments, including settings for strings, flutes, and reeds. It's basically a little smorgasbord of sounds, and it's a lot of fun to see what different types of tones you can get from it by combing different tones. It also has a variety of effects and other parameters to further utilize your sound. Generally speaking, the sounds on the F-100 aren't exactly realistic, and at times they can be a bit cheesy, but when it works, it works really well!

Don't expect a classic Hammond organ sound from the Hammond ExtraVoice F-100, as it isn't that type of organ. Instead, it's a unique organ with a variety of other sounds available. I wouldn't recommend this as a go to organ for any sort of use, as the sounds aren't reminiscent of an organ at all! However, if you want some cool colors to have on the side for when the mood strikes, the Hammond ExtraVoice F-100 is a great tool to experiment with!
Did you find this review helpful?yesno