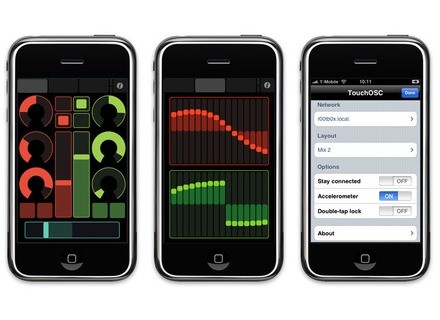 Hexler announces that the TouchOSC v1.9 update is now available for both the iOS and Android devices.

Users of Android smartphones and tablets can now benefit from the same MIDI and OSC control functionalities as the iOS users and remote control their DAW, DJ software and other compatible plug-ins and software. Of course, some Apple-specific features such as CoreMIDI can not be ported to the Android platform.

The version is the same on Android and iOS platforms. The v1.9 update adds more MIDI messages (CC, note, Program Change, Poly Pressure, Channel Pressure and Pitch Bend for all the controls), adds an XY MIDI mapping (place two or three fingers on the control will send x or y messages) and you get custom sizes for the interface.

Other changes and corrections were also added, note that the first generation of the MIDI Mobilizer is not supported anymore.

TouchOSC v1.9 is available for 2.69€ on play.google.com for Android devices and on the AppStore for the iPhone/iPod Touch and iPad devices.