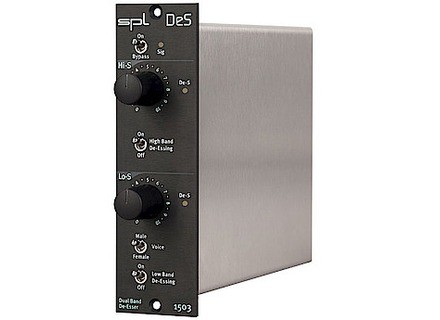 DeS, Other dynamic processor from SPL.

A dual band deesser based on SPL's classic design of the genre, the DeS features two processing stages that can be used separately or jointly since they are connected in series as independent de-esser modules. The Low-Band De-Esser (Lo-S) is set first in the chain, and if both de-essers are engaged there is interaction between them, making a signal already processed with the Low-Band De-Esser different from the raw material that the High-Band De-Esser would otherwise process.

As for the TDx, it is based on SPL‘s Differential Envelope Technology (DET) which allows level-independent dynamic processing by calculating differences in generated envelopes: these envelopes are always tracking the curve of the original signal to provide optimal results in every moment of the music, and as a result only two controls per channel are required to allow the user to completely reshape the attack and sustain characteristics of a sound.

Thanks to the new TDx parallel mix feature, it is possible to continuously blend between the processed and unprocessed signals, and the range of functions is extended even further and with the three parameters ATTACK, SUSTAIN and MIX, which offer an intuitive operation.