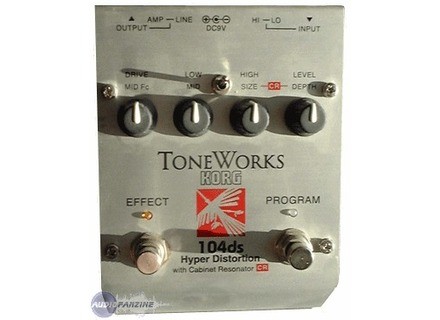 View other reviews for this product:
I bought this on eBay for $50 after reading about it online.

The distortion on it combined with the cab simulator feature makes this the best distortion pedal I've ever heard. So much distortion, so much control over the EQ. You can also switch between amp and line out and hi or low input(oddly, switching to low input gives more level, so I gather the choice is between high output pickups and low output). Having two setting available is also great. and the internal noise gate.

Downside is that the bypassed sound is louder than the unit itself maxed out. There is a gap in the sound when going from effect to bypass. It will also sometimes freak out and change settings, which I've determined is because 8 functions share 4 knobs, meaning there is a switch that selects which 4 functions you are tweaking. Something dodgy abut the switch. I've opened it up, it's NOT modder friendly at all. there's a ton of stuff crammed in this little box.

Bottom line, THE home practice/recording pedal. Direct into the mixer or recorder, sounds great. I would be wary of using it live.