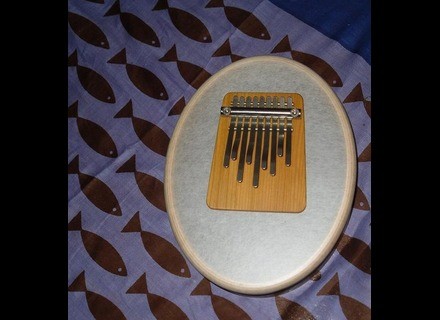 Buy this productView price information >
The sansula is a modern interpretation of the kalimba, also known as mbira or thumb piano, or thumb piano. It is an instrument native to sub-Saharan Africa, consisting of strips of metal attached to a wooden board or sometimes a hollow resonance. It is used to accompany songs and stories in particular Dogos. A German, Peter Hokema had the good idea to set a kalimba in the center of a tambourine. In fact, the resonance is increased and allows for new sounds. Long ago I wanted a kalimba after seeing a black playing this beautiful instrument in the subway. Nevertheless, I hesitated to plunge. Most are produced by craftsmen and kalimba tuning random does not always play with other instruments. Then I discovered the sansula offered by my darling. The tuning is in tune. No worries on that side. It is relatively expensive, but quickly addictive. The instrument is played with the thumb, index sometimes. The sound is really nice, it sometimes resembles certain sound of electronic organ. By putting the body on a surface, we increase the presence of low and removing the instrument, you get a wah very nice. Of course we can play several notes at once and even, via a microphone to amplify and effects. The sound is not very powerful, but enough, soft and resonant. The instrument does not play all the notes, it is given in A, but it is possible to change the tuning by moving the strips. Notes are the mid do so in long strands and the fa mi do on acute. There are two in the same octave, I think a change in favor of two floors.
Finally a device that is cheap, but very pleasant, we can walk everywhere and even without knowing in play, you get there quickly because we are always in the same key, even if the F and bring a color slightly dissonant which produces melodies involved. It's been a little sore fingers at first. Other versions of sansula allow an adjustment of the tension of the skin, but it is more expensive.
See the source
Did you find this review helpful?yesno
Cookies help us improve performance, enhance user experience and deliver our services. By using our services, you agree to our use of cookies. Find out more.