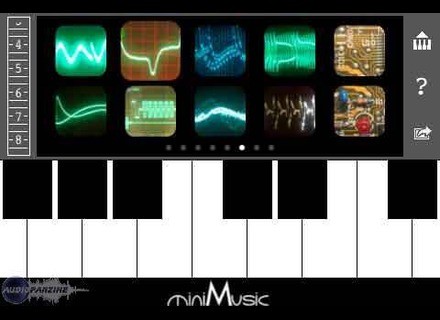 Pianofly, Other Virtual Synth from Minimusic.

Pianofly includes a scrolling, multi-touch keyboard. Sound is generated by an FM synthesizer, with an interface designed to allow anyone to create and edit instrument sounds easily.

Other piano applications for the iPhone generally show just one octave of keys, miniMusic says, then use tiny arrow buttons to shift up or down an octave. The keyboard in Pianofly is designed to move with you, scrolling as you play.

The sounds include eight pages of customizable instrument icons.

Planned improvements include multi-track recording and additional wave types and effects like reverb or flange to design even more elaborate sounds.

Check out www.minimusic.com for more details.