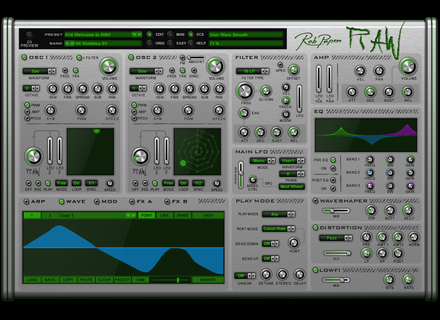 Rob Papen introduced at Dancefair his new Raw virtual synth dedicated to sound distortion, which should be available soon.

Raw is still in beta phase, but we already know that it will feature two oscillators, each with a Raw and XY pad to distort the sound and control its movement, a polyphonic mode as well as loop and sync modes. The synth can also generate non distorted sounds so it should be very flexible.

Raw includes filter and amp section with LFOs, a main LFO that controls the oscillator modulation speed with pre-defined and programable forms (you can draw the waveform in the Wavedraw section) with MIDI time sync, a modulation matrix, a waveshaper, a 3-band EQ, distortion, arpeggiator, two effect sections (reverb, gate, wobbler, delay…) and Lo-Fi. Rob Papen adds that Raw will ship with presets designed by artists and various playback options, including unison, are included.