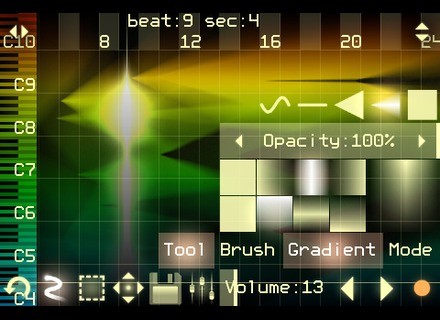 Alexander Zolotov launched this morning the V2 of his ANS simulation, a very old and rare russian synth. Available for free and for everybody!

Virtual ANS is available now on Windows, Mac OS X, Linux and Android, and will be released soon on iOS.

The ANS is a spectral, microtonal synth using photoelectric technology. It was created by russian engineer Evgeny Murzin between 1938 and 1958. The instrument can be heard on multiple soviet compositions as well as on Coil CoilANS project released in 2004.

According to Zolotov, the simulation of the synth allows for creating complex and unusual atmospheres, the instrument being clearly designed for experimentation. It includes a sonogram that allows for using images (PNG, JPEG, GIF, VNS) and converting them into WAV PCM uncompressed sounds and vice versa (you can convert a sound into an image).

Virtual ANS features a Virtual Analog sound engine, unlimited number of tone generators, an editor for the sonogram in which you can draw the spectrum and play it at the same time. Zolotov will also add more functions in future updates.

The instrument also includes a MIDI input and on iOS, you'll be able to export files via iTunes and WiFI import/export is also planned.

You can download Virtual ANS from this page, the instrument is free but donations are encouraged for future developments.

Have a great weekend!

And what the app will look like on the iPad: