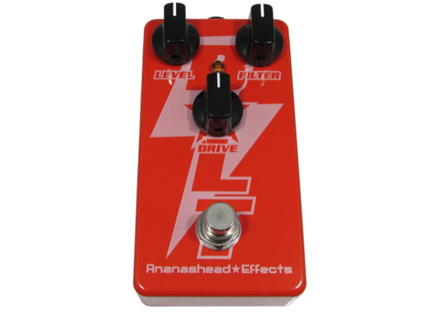 « From Transparent to Just a Little Dirty, Bolt is a Versatile Drive »
5

Value For Money : Correct Audience: Anyone
OVERALL IMPRESSION & SOUND:
Whether adding some clean boost, turning a clean channel into a crunch channel, or pushing a dirty channel for added bite and clarity in the mix the Bolt is a fantastic overdrive. What you will notice immediately is how transparent this drive pedal is, even when turned up full – it brings an amp’s character to life with very little coloring and without compressing or adding mid-humps. Guitar pickups or amps that are on the dark side tend to clear up and stand out in a mix much better, although if you like that darkness you can tweak the Filter on the Bolt or adjust your amp’s EQ accordingly. Pedro Garcia (the designer of Ananashead FX) relayed to me that he designed this pedal to act as a second channel for a friend’s non-master volume amp, a 1970s Sinmarc – it just so happened to work exceptionally well as a transparent Overdrive for other amps.

The Bolt is highly transparent with very little coloring, even when added to a hi-gain amp. With the Drive very low there is obvious energy and depth added to the signal, but without sounding darker or brighter. With the Drive up (at different levels and depending on your needs) the effect is more of aggression and boosting. The Filter has a useful range – when turned all the way counterclockwise there is a nice tight bottom end, whereas turned all the way clockwise the tone becomes very clear without sounding trebly or harsh – more of a sparkle. Whether working with dark or bright amps I found the Filter could be cranked up in either direction without sounding out of place. Also, there is very little added noise in the signal, whether working with clean, crunch or dirty amps and largely due to the position of the Drive. Some pedals have a lot of hissing going on, but not the Bolt.

GENERAL USE:
I found there to be three typical uses or (general) settings with the Bolt. If I wanted to give a clean, crunch or dirty channel a slight boost of energy (merely some added liveliness), then I keep the Drive turned all the way down while adjusting the Level (the Filter has no effect when the Drive is all the way down as it’s meant to select frequencies being distorted, viz., no drive = no filtering). If I wanted to make a clean channel into a crunch channel, then the Drive can range from 9-o’clock to all the way up, depending on how much crunch I want, but also how clean the clean channel is (some clean channels do have some grit or may already be considered a crunch channel, as is found with some hi-gain amps). In the demo accompanying this review I added the Bolt to the very clean channel of The Countess V4 preamp and could turn the pedal’s Drive all the way up, which resulted in both a nice crunch, but also sufficient gain to play lead. When added to the ‘clean’ channel of The Sheriff V4 preamp (which is more of a crunch channel), turning the Bolt’s Drive to around 12-noon was more than sufficient and added some nice grain to the signal. When adding the Bolt to the dirty channels of the two aforementioned preamps, as well as The Kraken V4, I preferred the Drive to be around 10-o’clock (a level that added some excellent energy with grit, but without over-saturating the signal). The Filter (which is a bass/treble knob) has a very nice range and its position varied depending on the preamp (The Countess is rather dark, whereas The Sheriff and The Kraken are brighter). You can order the Bolt with either top or side mounting jacks, a great option typically not afforded most pedals (I’m a sucker for top-mounted jacks, but different pedal board configurations have different needs). This pedal also can be daisy-chained (connected with the same power supply) with other pedals. The Bolt does not run on batteries and requires a 9VDC power supply while consuming approximately 100mA.