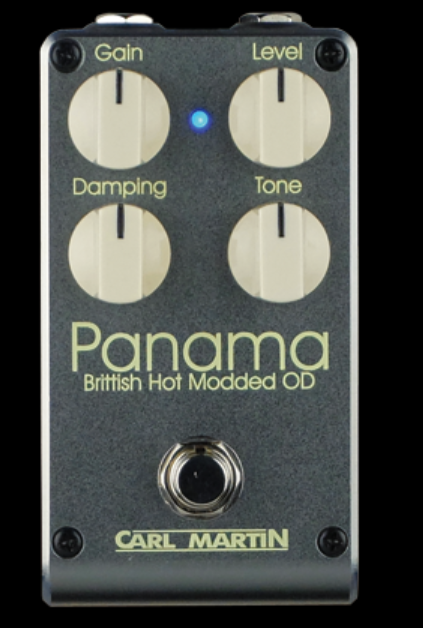 « A classic drive/distortion that remain tight even with maximum gain »

Although there are comparable pedals out there, what sets the Panama apart is the Damping mechanism. Panama produces some good bite and crunch around the 9-10 o’clock range and begins to get aggressive at 12-noon… and certainly more so beyond that point. However, like many amps and certainly other ‘hot’ overdrive pedals, the higher you crank the Gain the more saturated and somewhat muffled or boomy the tone becomes. This is no different with the Panama, and you begin to lose that ‘cut through the mix’ quality beyond the 12-noon or 1-o’clock mark. However, with the Damping mechanism you can zero in on greater clarity as some bass gets pulled out of the signal. What you’re left with is a more aggressive tone that is clear and that cuts. As you dial back the Damping you re-introduce bass into the tone, which fattens up and darkens the tone (which you may want for leads, whereas the aggressive dirt may work better for rhythm). The Tone knob does seem to produce a lot of bass if turned counter-clockwise beyond the 10-o’clock position, and seems to sound best (with my gear) around 11-o’clock and 2-o’clock (depending on the cab-sim and microphone used). Turning the Tone up full, for more Treble, does sound agreeable and without any brittleness or harshness.

OVERALL IMPRESSION:
A touch more pricey than some other Carl Martin pedals, at $199, Panama nonetheless remains a ‘typical’ pedal investment in today’s market (and for Carl Martin quality). Some may suggest that it’s not as ‘hot’ as some other Carl Martin Plexi pedals, but Panama is advertised as a moderate gain overdrive (although it sounds very distortion-like). Regardless, there is plenty of aggression for either rhythm or leads on a clean channel (the demo video alludes to that fact)… add a hint to a dirty channel and there are more than enough balls for anyone’s tastes. The overall tone sounds fantastic, and I was able to produce very good and usable tones with a host of different cab-sims and microphones, including Marshall, Vox and Fender. Most notable is the ‘brown’ grainy dirt characteristic of Panama, but also the ability to Dampen the signal so that as you crank the Gain you retain the aggression and clarity while reducing any mud or muffling (often caused by too much gain). Not many OD or distortion pedals allow you to go beyond 1-o’clock without losing clarity, but that is not the case with Panama. I should note that Panama was made in collaboration with Pete Thorn, a guy who knows tone.

GENERAL USE:
Panama is simple enough to use. The Level knob controls the output or volume, and should be turned to 9-o’clock when first firing up your gear (then adjust as required). The Tone knob’s sweet spot, in my use, tends to be between 11-o’clock and 1-o’clock, although it depends largely on the amp and pickups (whether dark or bright) – a bit lower or higher still sounds pretty good. Turning the Tone lower than 10-o’clock (more bass) produced too much muffle or fatness, but I did use humbuckers and more bass may feel quite at home with single-coils. Turning up the Treble high still sounded good to my ears, and without being shrill. The Gain begins to kick in well around 9-o’clock and then upward of 1-o’clock seems to be a sweet spot (although with this pedal it still sounds good to the max). The Damping knob is very cool, in that it adjusts how loose or tight the tone, viz., how much bass you’re leaving or trimming. Once Panama is up around 12-noon to 2-o’clock, the tone (like most pedals in its category) tend to get a bit more saturated and not quite as sharp. However, turning up the Damping increases tightness and clarity so that even with Gain up full you still hear crisp distortion cutting through; and, of course, if you prefer a slightly fatter tone then turn the Damping down.

OTHER DETAILS:
Panama is a regular-sized pedal, measuring 112 mm (L) x 60mm (W) x 50mm (H) with knobs (4.4 x 2.4 x 1.97 inches). The heavy duty anodized chassis has a silver top, black sides and light green lettering. It may be a vintage-type pedal (if you can call 80s Metal ‘vintage’), but it certainly looks modern and streamline. The four plastic knobs are a heavy quality and should withstand normal use and abuse. All knobs have good quality pots (smooth and solid when turned). The footswitch (on/off) produces a solid click when engaged or disengaged – there is no popping or significant signal noise when switching. The cable input/output and the power input all are located in the back, which saves on pedalboard space, but also keeps them in a more secure location. Panama includes Carl Martin’s DC/DC converter circuitry, which allows the pedal to run with +-12V internally (in other words, better parts and better sound). It does run on a standard 9VDC power supply while requiring 100mA of power.