Add this product to
Catalinbread WIIO
1/ 29 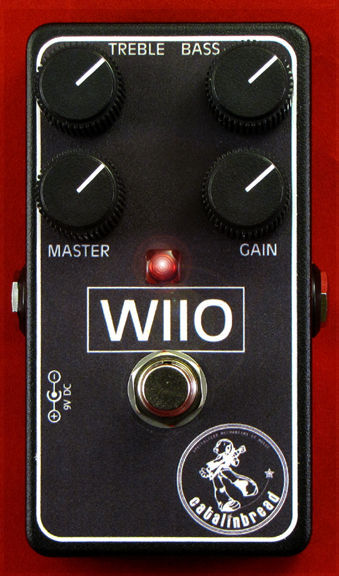 Publié le 03/19/11 à 12:45
The Catalinbread WIIO is a straight forward dirt box as far as controls go, you have controls for Treble, Bass, Volume and Gain. It has a mono in/out and a 9v adapter jack.

While the controls are simple, the vast array of different tones you can get out of the WIIO make it anything but your standard run of the mill amp in a box pedal.

The EQ controls are very responsive and interact dynamically with each other. Unlike the EQ controls on some pedals, the WIIO lets you add Treble or Bass that feels natural, it adds to the right frequencies to make it feel very amp like.

While meant to be used as a distortion, I've found the WIIO to add punch to a clean tone when set with the gain down and the volume up a little above unity gain. That is not to say that the WIIO isn't fantastic as a distortion, it most certainly is, but its much more than that. I find myself struggling to find a tone that isn't usable.

Couldn't be simpler to use, plug in and play. Runs off a 9v battery or a power supply. The folks at Catalinbread have told me that It will run at up to 12v, but the difference in sound is negligible so they don't advertise or recommend it.

Did not come with a manual, but if you can't figure out how to use it then you should stay away from effects in general.

My primary guitars that I use have humbuckers, but the WIIO loves my Telecaster too. I run through a Palomino v50 or a Vox Lil Night Train. It doesn't matter which guitar or amp I'm using, the WIIO delivers. It can sound crisp with some bite on the top end, or when run into a semi dirty amp it can sound like an amp running balls to the wall.

I absolutely love this pedal. It has become my go to distortion. It doesn't matter what sort of tone I need, I know I can get it out of the WIIO. I'm yet to find another pedal that can do all that the WIIO can. I've owned pedals that can match the WIIO in a specific sound, but they are one trick ponies and its that sound or bust. For the price it can't be beat, my WIIO never leaves my pedalboard.