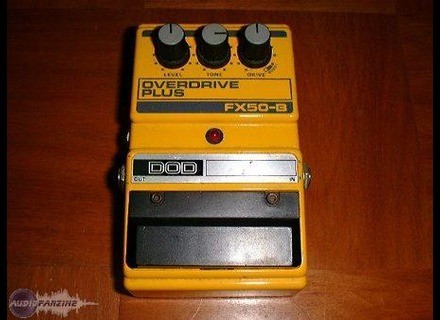 An
overdrive pedal with adjustable controls for, Level, Tone, and Drive.
It's not well known in the USA. It is yellow (firstly for me, an
overdrive should be green). Also, the 9V battery is easily
accessible. Editor's
Note: The next two sentences are mostly gibberish to me, however, the FX50B
is hooked up with standard 1/4” TRS hardware just like most
consumer audio gear. - ed.&nbsp;As in the notice prcis Previous requires a mini cable to connect the pedals (not mini jack) on a standard adapter. Too bad. CHAC trs , it must be stressed, should take some of the seed.

The
manual is in English, which is a problem for me because I speak only
French. Therefore, I'm not sure I know how to use this pedal... maybe
a bit over my head; but it seems simple enough.

It's
an overdrive pedal, but it is quite different from a TS and similar
pedals - a little less midrange and seems bassier. The distortion
level is higher than my Maxon OD808. The sound is not terribly bad,
but I think my used FX50 kind of blows. When you turn the drive knob
past 9 there is a boost function where the gain increases
exponentially. Interesting, but I wonder, because unlike an 808, it
functions poorly as a boost pedal. If you set the Drive at 0, the
sound level is low, so it's necessary to compensate by increasing the
Level; this is not really a boost. A buddy said it was good for
someone who plays rock, but not as good as an 808 or a TS for blues
(there
are better pedals than the TS for blues – ed.).
However, the DOD's price is lower than those other two. I used a
Start (could
he mean Strat?)
with a LAG Roxane (as
far as I know this also is a guitar – not an amp)
and more first generation (preamp
gain?),
on an (the
rest makes no real sense to this editor)
amp lamps, it goes without saying.

I
wish it had a low level (0 – 1) boost function that would warm up
the power amp's input a bit before the drive kicks in. The gain must
be set to at least one for anything important to happen. Except for
the color, I like the overall design in general, especially the easy
battery access. The $39.55 price is about right, but I wish it could
have been spent for the competition's little green box. Editor's
notes: Does “TS”
= Toob
Skriemur?
And “breath,” I
just don't get how that fits in there. - ed.
See the source
Did you find this review helpful?yesno
Cookies help us improve performance, enhance user experience and deliver our services. By using our services, you agree to our use of cookies. Find out more.