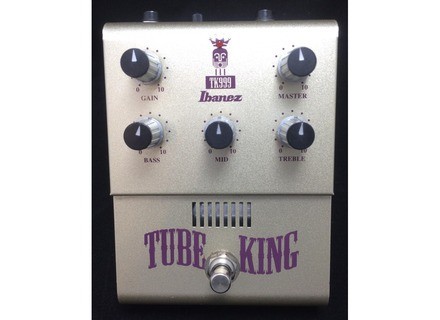 TK999, Overdrive pedal from Ibanez in the Tube King series.

View other reviews for this product:
Pedals for distortion 12AX7 tube, provided with rglages numerous and extremely effective.
Gain, volume, a 3-band EQ, and a big cross to activate it.
At the rear, enough to connect the power supply (included), an adjustable noise gate (but pretty useless for me), between exit.
Note that the input and output are reversed from what is commonly done, have to think about when you have no sound coming out of his amp ...
Knobs somewhat cheap (for PDAL also trs solid) and led one would wishes hair largest. So I him dishes that 9.
Original lamp fairly honnte but replaces for me by Mesa Boogie.

Manuel almost non-existent (one sheet ...); but it is Ralite pointless in the sound that comes out of this thing!

The effect is excellent, which is a PDAL I did not even spar APRS leaving the guitar to bass.
It is able to turn any amp transistors two bullets jewel ...
Impressive musical. Rglages VERY effective. A dixime turn on any knob that is. It accde both the crunch that the distortion free, pushing up hard by boosting with a legalization buggers.
My sounds prfrs remain with Les Paul, of mdiums pousss, not bad treble in one Marshall unencrypted.
Pedals that allows a play on the nuances of the game, as the distortion (finally!) Proportional to the stroke mdiator.

I bought in 1998. I played until 2003. I have a ready-time guitarist in my group. I do not spare anything in the world!
The only problem is that for perfect happiness, it would have taken me to switch several DIFFERENT types of sound!
Was released at the same time the compressor version, if it is as good as the distortion, I'm interested in my bass!
See the source
Did you find this review helpful?yesno
Cookies help us improve performance, enhance user experience and deliver our services. By using our services, you agree to our use of cookies. Find out more.