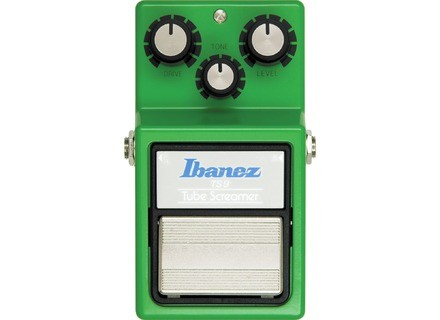 Buy this productView price information >
View other reviews for this product:
This pedal's been around for decades and has been used by almost every professional guitarist at one point or another. Used either as a slight overdrive or as a boost to push a tube amp harder this pedal is very versatile.

My only real complaint about this pedal is the LED is very dim. Unless you're on a dark stage and in direct vision it's very hard to see if it's on or off. There are mods to replace it with a brighter one, but stock it's not ideal. Other than that it's great, haven't ever had any problems and I've owned a few. Switch has never gone bad, knobs never get static-y, and jacks have never cut out. Pretty solid pedal.

This pedal has a pretty natural tone, sounds pretty similar to a real overdriven tube amp. There's a slight mid boost to it which helps cut through other instruments as well as filling out the tone a bit. With the gain high and volume around half it gives a natural overdriven tone, similar to Steve Ray sounds. With the gain at minimum to half and the volume maxed it works as a boost. Put in front of a tube amp it'll push the amp harder resulting in even more overdrive than just either by themselves. Most modern metal bands prefer to use one as a boost into a high gain amp. The mid boost again fills out the tone a little along with helping cut through the mix. It also helps tighten the low end which is crucial for faster music along with low tuned guitars.

I've owned a few of these over the years and I wouldn't hesitate for a second to buy another if anything happened to this one. It's very solid built, looks and sounds great, and is a pedal that always stays in my chain regardless of what kind of music I'm playing. I'd recommend it to anyone playing jazz, blues, all the way to rock and metal.
Did you find this review helpful?yesno
Cookies help us improve performance, enhance user experience and deliver our services. By using our services, you agree to our use of cookies. Find out more.