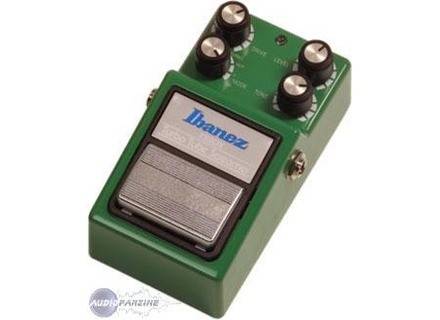 Find the sound with this pedal lon desire is rather easy for me if the same Level button is too powerful.
In fact, I use a 120 watt amp frontman and I just quasimment double the gain of my amp with the pedal fully, something impossible with a Boss type superOD.
In short I recommend this pedal for small amp (less than 80 watt) seeing if we can do spit the Beast has its maximum without screaming his neighbor;
a pedal is not consuming too much battery (a little prs as a boss) and that is not too much noise if you plug a 9v power supply it.

Oh, it gets to the point negative: SOUND.
for me this pedal is a pedal for blues and nothing but the blues. it may have had the sound of fiddling santana in well with the TS9, and even to the large rock (for me the TS9 mode is the best of the four modes and most versatile). But then the sound is not exactly the same as a TS9 reissue (Colorette least I think it's better now buy the latest or T808 (if you want one of the best overdrive in the world) rather than buy the TS9DX thinking have the most original TS9 saturations noms.Pour worthy of me is a pedal TS9DX m * rde.
Let me explain:
Not only is the TS9 is cold but its other modes are horrible;
mode "+" is a more blues, deeper and compresses (type mesa boogie) of the TS9 but already his heel !!!!! and it will only get worse as far and in ways that will also be less interresting because of a compression up "in creshendo" mediums and heavy rock rotten having nothing to do with the sound TS9. With additional modes I almost screw up my amp so ca heels.

Initially I had gone to buy a reissue TS9 or TS808 but the seller had none so I rabatu on TS9DX.
I bought and resold within three months so it does not suit my sound.
In addition it is super expensive for an OD pedal (150 euros).
I had this one APRS overdrive pedal replacement and tried in the blues driver boss has since I bought it. certainly it is not worth the TS808 trs but is good quality, cheap is versatile. I advise you if the company TS9DX which for me is a true neo-cons for metalheads fan of his ultra fat inaudible.
See the source
Did you find this review helpful?yesno
Cookies help us improve performance, enhance user experience and deliver our services. By using our services, you agree to our use of cookies. Find out more.