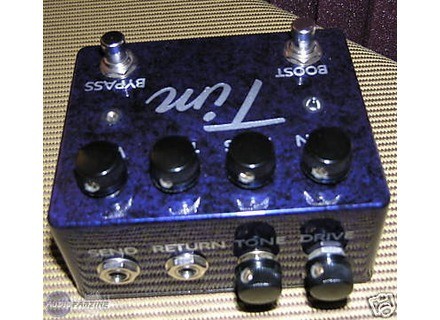 I found this pedal a little hard to find my way around at first. The equalization knobs work a little funky. I found myself running the bass at noon and the treble at 10:00 mostly. The voicing switch is pretty interesting and in my opinion makes the second version of the pedal worth buying over the first version. The loop is nice, but I didn't see an application for it for my usage. I found the boost mode a little lacking. The switches, which are oddly placed on the rear of the pedal, seemed to make only the slightest changes to the sound. I assume that is by design.

I tried the pedal with both a Gibson Les Paul Custom and a single coil Fender Telecaster. The pedal didn't seem to favor one over the other, however I tend to prefer the sound of a overdriven humbucker guitar. I wasn't sure what the pedal was going to sound like before I ordered it. I had heard that it excelled at chords and rhythm playing (which is somewhat hard to find in an overdrive/distortion pedal). After owning it for a while I was left rather unimpressed. It didn't sound bad, but it never blew me away. I didn’t find it to particularly excel at any one thing.

This is one of the most sought after pedals currently being made. Reminiscent of the Klon Centaur when it was still being produced, even used, TIM and Timmies sell for a premium since there are long wait lists to actually get one. This creates an aura of mystery which adds to the hype which adds to the demand, which increase the price. Is it deserved? Well, it's a good overdrive pedal, but it's not the end all be all overdrive pedal. To me, it's not worth the secondary market price. I don't think the boost function is worth the extra money, either. You're probably better off with a Timmy, in my opinion.
Did you find this review helpful?yesno