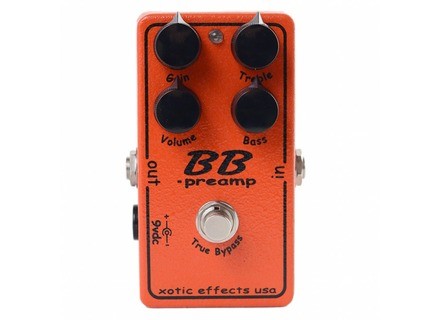 View other reviews for this product:
# The BB Preamp offers awide variety of sounds. It's capable of a 30dB+ clean boost with an adjustable ±15dB two band active EQ which adds a wide range of harmonic content to your ideal sound.
# The BB also utilizes a pre-gain stage which allows the Pedal to go from a very pristine clean to a very smooth,compressed, overdriven sound.
# True bypass for eliminating any signal interference when switched off

Very simple to use with the added feature of treble and bass knobs unlike the universal tone knob that most overdrive pedals have to offer.

Set the gain and volume according to how you want to use the overdrive whether it be for a mild bluesy sound or a high gain boost.

The BB preamp has become one of my favorite pedals of all time. It is true bypass and sounds REALLY good with nearly anything. Does this mean that it's transparent? I wouldn't say so. I'd say it's more like, the BB preamp has a specific sound that seems to capture everything good about what an overdrive should sound like and implements that onto your existing rig.

I can pretty much declare that this pedal sounds good with nearly every guitar and amp config. There is just no way that the BB can't be tweaked to suit every rig. It's almost as if it was made to be on everybody's board. Though it's strength does lie in more low gain/medium gain applications, you can use the BB as a high gain overdrive, with the gain know low and the volume knob maxed out, tweak the treble and bass accordingly. But the sound will definitely NOT be the same as let's say, a TS-9. It doesn't sound the same as a TS-9 and although it does saturate the signal the same way it will be a different sound, and to my ears, it sounds great! It's THICK and raunchy! And the mids aren't boosted as much vs a tubescreamer. Rather they're slightly more scooped sounding.

Overall, great overdrive pedal for almost all applications. Though as a high gain overdive like I stated earlier, it sounds different and doesn't saturate the same way a tubescreamer does and so might disappoint some players that play that style. In my opinion, I actually like the sound it produces in that situation as it's different, thicker and raunchier and not the same as every other player.

However, the BB is great as it's versatile; it can be used as a clean boost, with or without a bit of an EQ, a low-gain overdrive for bluesy stuff, or offers enough gain on tap to be a classic rock-like distortion pedal too! And when paired up with an amp that has enough gain on tap, it can be used as a high-gain overdrive! And yes I'm aware that 99% of overdrive can actually be used the same ways but when I say this about the BB I actually mean that they technically can be used in all these sorts of ways and actually SOUND GOOD.