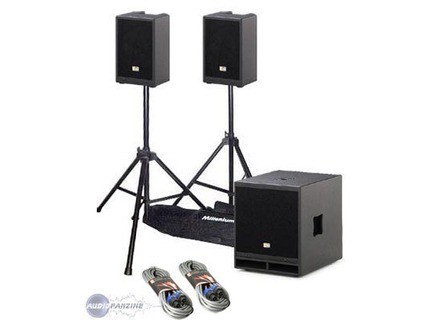 View other reviews for this product:
2-3 weeks.
I have tried and used a lot of sound systems before 15-20 years on stage ... I also have a couple of Pyrit 15A of the same brand, but it is 2 active speakers 15 "+ 1.7" compression driver this is not the same system but comparable sound quality ....
This is my first (acheté. ..) 2.1 powered speaker system (active / passive system ...) I have, I've used but they were not mine.
The value for money is simply "inconceivable."

Compared to Pyrit 15A are passive satellites that give me: this is "analog" side a little room which I like but they still make a clean sound but less "medical" if I can say that my Pyrit 15A. These are a little "too" clean / clean! Power is heavy, what do good terraces in summer.

I was very hesitant because I have tried many brands or equivalent system, that is to say approximating itself in terms of price (yes, the sinews of war ...) either in terms of power "announced" . I tried the HK 300 Elokance NANO SLIM 800 (qque or something like that ...), LD System G3 15 + short .... As I had not been tried The Box CL 108/115 Basis Bundle I was a little scared, I thought I would qque something similar ... Well NAN! This is not the same: it's better, more powerful, mojns expensive and it sounds more musical, less sound anything.

This system allows to have good deep bass, powerful satellites and restore well the rest of the musicality, bravo Thomann! Bine!


I do it again if he slammed the choice: Thomann my resume and I would like the same system back!
See the source
Did you find this review helpful?yesno
Cookies help us improve performance, enhance user experience and deliver our services. By using our services, you agree to our use of cookies. Find out more.