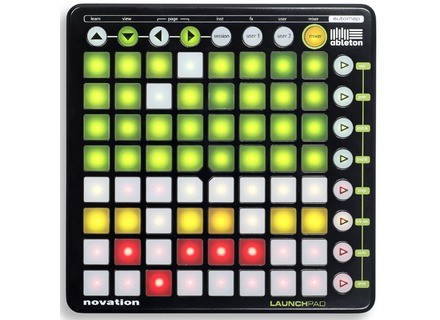 Launchpad, PAD Controller from Novation in the Launchpad series.

Novation has announced that Launchpad, the interactive controller for Ableton Live, is now shipping and available in stores and online.

Launchpad has been jointly designed by Novation and Ableton, to bring the features of Live to the musician. The 8x8 grid of backlit buttons is designed to address a multitude of functions, with the help of mode selectors that transport the user around the Live interface.

Here's what they have to say: "Flip from launching clips to tweaking mixer settings in a stroke. Launch your song into a heavy build-up, then switch to a synth or a drum machine for an impromptu solo at the touch of a button. It's all possible on Launchpad, and all without touching the mouse or keyboard."

The device itself is bus-powered from a single USB connection, and has a ten-inch square desktop footprint. Rubber feet are designed to ensure Launchpad stays secure on the surface on which it's placed, and an optional padded neoprene travel sleeve is available. It ships with a USB cable, plus a DVD ROM with Mac and PC installers for a special 'Launchpad Version' of Ableton Live 8, as well as 1GB of sample content from Loopmasters and Mike The Drummer. It also comes Automap enabled.