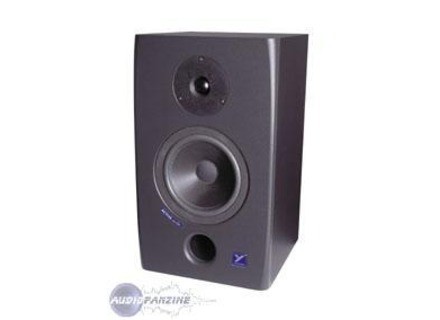 Each speaker is biamped (powered), the 6.5inch woofer receiving 85 watts and the 1 inch tweeter 30 watts(115watts total) theres also a 2 inch cylindrical port beneath the woofer for a more open low end. beside the basics, the ysm1p also has a clip/limiter button allowing you to push these speakers without distortion and clipping. also featured on the back panel is sets of Dip switches which allow you to manipulate the eq response depending on where ure speakers are palaced, it has 6 choices, i just have it on normal. i can also place them real close to the my display monitor without screwin up my image, and what else... the amps shut off automatically when their over heatin, oh and i really like the little blue and red led's. the only thing it would benefit from is a simple volume knob, (which most monitors dont have anyway), because im running a delta 44 at the moment with no mixer its a bit of a hassle, my only volume control is from my computer, it does have an input trim level, but thats from -6db to + 9 db, im pickin up an 002r soon so itll all be good

Reccomended to me by two different sales persons at a local Toronto music store (long&mcquades), claiming to blow the KRK RP8's, alesis mk2's and event tr6's away accuracy wise, i decided to give them a try. i was skeptical because yorkville is a toronto based company so i figured they were bribed or somethin, but i put them to test(popped in rhcp blood sugar sex majic and bjork - post) and narrowed it down to the krks and the yorkvilles, the krks sounded sweeter, very listenable, buti noticed that the yorkvilles had a more controlled low end, and a very nice mid range, the krks seemed to lack in the mid range, to me the ysm1p mid range is their hit, ive always had trouble tightening up guitars with the bass guitars, usually a trouble in the low midrange but on these speakers ive managed to get a nice balance between the both. The high end is also very nice on these,smooth but accurate, not harsh. I use these as every day speakers also and i never get tired of their sound but these are not multimedia speakers, they don't seem to sweeten anything, and after hearing my old mixes on these, ive decided to upgrade my preamps also

Well you plug them in (1/4 inch or TRS) and you listen to them, and then u turn them off when ure done

i only got them 3 months ago, and theyve got a 2 year warranty, so im ok, ive clipped them a couple of times by plugging in some mics without turning the input level down, but thats it, their factory is also arount the toronto area so if i had problems i could bring them there myself they seem very durable, they're dam heavy, but i wouldnt drop them

well the first nite i got em, i hugged them before bed, so i do love them, im happy with them, my mixes have improved a lot and above that im more confident with my mixes, i know they will translate well into other systems. because i just got them and my ears are still learning their response, i still bring my mixes to other systems from time to time, but they're always on point. i know these arent available everywhere yet, i would suggest that if they are in your area to definately give them a listen. many people compare them to the Mackie HR824 and i think if they were given a chance in the world market, they would definately be one of the top choices in the 300-500$ range

Originally posted on FutureProducers.com
Posted by: zombiesaregoodforyou (January 2-, 2005)
Did you find this review helpful?yesno
Cookies help us improve performance, enhance user experience and deliver our services. By using our services, you agree to our use of cookies. Find out more.