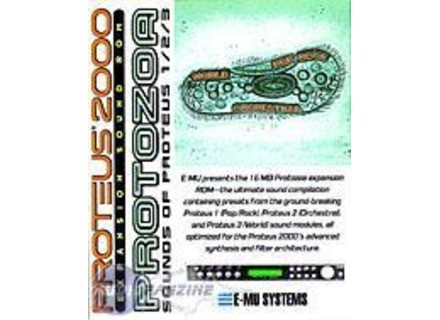 View other reviews for this product:
E-mu in 1988 invaded the middle of the sound module with a Proteus to become the n1 manufacturers expanders since annel. And E-MU is the rest of 1988 2001, has commanded respect. So a commercial E-mu Proteus 1 and 2 (orchestral) and Proteus 3 (World), Proteus FX Ultra Proteus, the Vintage Keys and Morpheus. You breathe slowly and it takes ... This entire collection of modules, because it is a vritable Saga, repeated the sound banks diffrent "Samples" in the Emulator II and EIII SERIES compile modules under various typs trs. That's all a la carte Protozoa. It only 16MB but normment register sounds. Many will say "Yeah, not break a three-legged duck." Yes, but be aware that E-MU's called the same Potpourri>> see link: http://www.emu.com/online_shop/roms/protozoa.asp
That is to say ...

>>> Ultrasound current <<<
Cordially
Dr. Tulp Frog
See the source
Did you find this review helpful?yesno
Cookies help us improve performance, enhance user experience and deliver our services. By using our services, you agree to our use of cookies. Find out more.