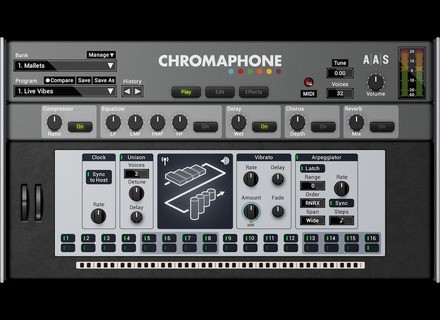 Applied Acoustics Systems has released an all-new version of its Chromaphone creative percussion synthesizer. Chromaphone is a synthesizer which uses acoustic resonators to create drums, percussion, mallet, string, and other unique instruments. Drumheads, bars, marimbas, plates, strings, and tubes are combined into pairs and played by a configurable mallet and a flexible noise source. A proprietary coupling technology, which models how vibrating objects interact and influence each other, captures key acoustic behaviours of musical instruments resulting in a vast range of sonic colors.

Chromaphone 2 is available now at a suggested retail price of $199 but until April 11th, it is offered at the introductory price of $149. During this same period, all purchase also include the new Synbiosis sound bank by sound designer Daniel Stawczyk, a $39 value.