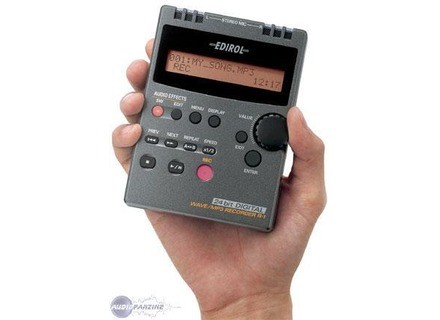 View other reviews for this product:
The Edirol R-1 is a compact solid state recorder that uses microSD cards to record .wav files up to a resolution of 24 bit, 48 kHz stereo with its built in, twin condenser microphones. MP3 recordings and lower quality stereo and mono .wav files may be recorded, but I have only used the highest quality settings which produce very accurate results. The 2 gb card that is included will record for approximately an hour and 50 minutes at the highest stereo resolution. There is a switchable low pass filter that may be set at 40 hz, 80 hz, or 120 hz, or off entirely. There is an 1/8” line in for connecting external microphones and an 1/8” headphone/line output on the other side. On the rear of the unit is a small stand for slightly elevating the recorder when placed on a flat surface. There are automatic record level setting of “high” and “low,” but it's probably best for the user to set the level at manual to adjust the optimum recording level for the material at hand.

I purchased this to do live recordings of concerts. It records a little hot with the condenser mics, meaning I have to set it manually to a recording level of 0. Fortunately, it hasn't clipped on me yet, and having nearly two hours to record is plenty of time for the type of work I'm doing with it. When I received the recorder, I was pleasantly surprised by its compact size, which is small enough to slip into a shirt or pants pocket. It handles recorded sound very accurately and even has some switchable EQ controls in the menus that I've never bothered to fuss with. The battery time is decent, but I'd recommend anyone who purchases it to also buy a 15 minute recharger set for AAA batteries. You will not have to change batteries within a straight two hour recording. For longer recordings, on either a larger card or at a lower resolution, the recorder can be USB powered, such as through most standard micro USB chargers.