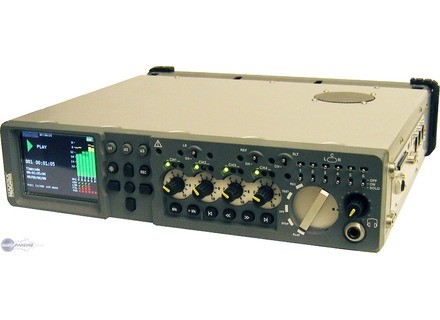 View other reviews for this product:
The Nagra VI is a 6 track recorder, recording on hard-disk and / or Compact Flash card. It has 6 analog inputs, four pre-amplified microphone that are well understood in switchable line levels .. For my part, I do have a small regret is that no two preamps to make additional catch multichannel systems with Holophone types or DPA 1500, requiring at least five microphone inputs for registration of 5.0, it is a shame ..
Two digital inputs (AES / EBU) are also available instead of the analog inputs 5 and 6 are switchable via the software of the machine. At the outputs, there are two headphone jacks, a speaker output, a reduction in mono, one AES / EBU XLR and two by the sub-D, and finally a stereo output Mix called symmetric. The original IDE drive is 120 GB capacity. Another little regret, with the absence of a DVD / BRD home as his colleagues in Sonosax AATON and yet very useful on a shoot, or in the evening if you do not have a computer to discharge sounds, it happens more often than we think .. on this point Nagra offers support engravings external via USB, but in my opinion it does not replace the convenience of a trick-camera, because no one wants to carry around various external devices that one can forget to take over in a hurry.
Nagra side routing is simple, perhaps a little too in fact .. It is not possible to double the recording of the same entry on two tracks simultaneously with the processing of different filtering or limiting, or other stunts sometimes necessary. As against it is of course possible to record a premix of 4 in post-gain, for example, lanes 5 and 6, via a dedicated page with a small pan for the first 4 entries. It is then possible to provide a premix bipiste pole / static for example movies or instrumentals / music room for recording. Hand mixing, it is of course possible to mix the 6 inputs to the main stereo output.
In the menu of a soft top on which to define the act of the front four potentiometers. They are assigned by default to the input gain, you can disable them or set them to "win mix", ie to define the level sent to the premix described above. In practice, this system allows some "fantasy" as to control the input gain of a track with a knob while adjusting the "gain mix" of the track in the premix with the potentiometer 2. That said, the limits are quickly reached, the number of knobs naturally not being expandable .. In an ideal world, would have eight knobs to provide input gains while providing the ability to control the levels of a premix / mixdown, but now four knobs, one is quickly limited when using more than 2 sources ..
Nagra like all his colleagues implemented a dématriceur M / S can act on the input pairs 1 and 2 and 3 and 4, and of course affecting the monitoring headphones, unless you have selected the "monitoring output "proposed for the MIX output.
I used music recording of an acoustic piano and a brass ensemble (stylish jazz). The preamp section of the Nagra is of very high quality and absolute transparency, and generates almost no breath even at very high gain. The analog to digital conversion seems to be high quality too (I only have my ears to judge) but this performance should be almost disassemble the machine to study the pre-amp circuits and conversion, and perform scientific measurements with various devices dedicated and reserved for maintenance or services to industry. But if we trust in his ears, on this point is flawless!
See the source
Did you find this review helpful?yesno
Cookies help us improve performance, enhance user experience and deliver our services. By using our services, you agree to our use of cookies. Find out more.