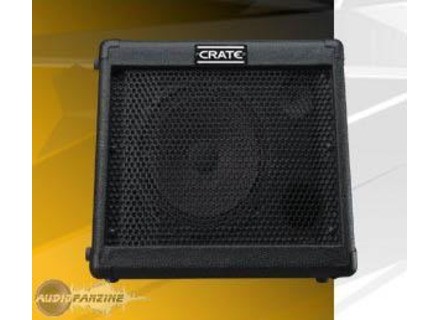 View other reviews for this product:
This is a transistor amp for any on-the-go musician. It delivers 15W of power and is driven by a large 'car battery' which or course can be recharged. A full charge can last up to 8 hours (plenty enough for most applications).
You can connect two instruments (one XLR/Jack combination and one just Jack) and have one EQ section (hi/mid/lo) controlling both. There is also an RCA in and a headphone out...that's it. There are not effects or effect loops - this unit was designed to be as simple as possible.

The Taxi is basically plug-and-play. You don't really need a manual. You get a clear and loud sound right away - any sound tweaking should be done with outboard equipment though. The built in EQ ist good for last minute adjustments but really is not of very high quality.
The unit is quite heavy - but on the other hand you get up to eight hours of independence.

This amp does not really sound good and it is not the intention of this piece of equipment. It sounds decent enough though and most importantly: it is loud! I was quite amazed at the volume that came out of this little box. I know now why this has been a staple for street musicians. When you stand outside it is not important if the highs are breathy or the lows are tight - it mainly matters that you are heard over all the other noises surrounding you. Most players add a bit of delay to make the signal less dry.

This amplifier has really been holding its own ground mainly because it can deliver a loud signal for quite a long time without having to plug into a power outlet. If you want more power get the TX30. I think Roland just put out a new version of their cube series - I don't know how well they do compared to the Taxi though. I also don't know if this amp should be any bigger or heavier for it to be still portable. If you are a travelling street musician this might already be too much - maybe someday they will develop lighter batteries.
The Taxi 15 really is not very expensive though and is built to last. So if you need a setup that needs to be independet of a power supply and still need to stay within a certain budget this might be an interesting solution.
Did you find this review helpful?yesno