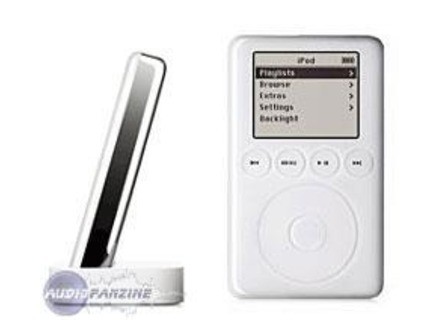 View other reviews for this product:
Apple's Third Generation iPod was, for most people, their first iPod, and it was the generation of iPods that started it all. My particular model was the 20gb, although I later upgraded it to a different size. Overall, there were 5 different storage sizes of this iPod, including 10, 15, 20, 30, and 40gb models. On the earlier iPods, including this one, Firewire was the primary connection, and you had to charge the iPod over the firewire port. The included cable also had a usb port (in a y-cable like fashion) that you could use with Windows in order to sync the songs. But this was the last model to rely on Firewire, and all newer iPod models would fully support USB in addition to supporting Firewire.

What made iPod's revolutionary, and what made then stand out from everybody else, is the capacitive circular control. No one had seen anything quite like it before, and it was very easy, intuitive, and beautiful to use. The main button in the center was also capacitive, as well as the other 4 main buttons on the top of the front (back, menu, forward, play/pause). One problem with the capacitive controls and buttons, though, is that you cannot normally use them while wearing gloves, and you can't control them with pens or other objects. This prevents the buttons from being activate on accident, when the iPod is in your pocket or purse, but it also makes using the iPod during the winter to be a bit of a hassle.

The device is relatively small, and definitely portable, considering that there is a hard drive inside of it. And it is very easy to setup using Apple's free music organizing and playing software, iTunes, which in itself is a huge factor to why the iPod has been so successful over the years. Even at ten years old, there is still a demand for these iPods, and that just goes to show, how valuable and popular they have been, and continue to be.