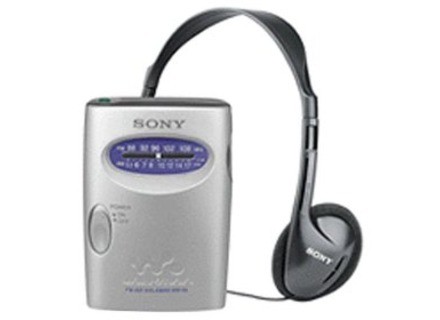 Buy this productView price information >
The Sony Walkman SRF-59 is a portable radio device, with a tuner for both AM and FM, a local and distant DX switch, two separate antennas, a convenient belt clip, and much more. It is one of many Walkmans, which were popular portable radios that Sony has been making for quite a while. Nowadays, radios have fallen by the way side, with newer mp3 players and smartphones dominating the portable music market.

However, I bought the Sony SRP-59 as a FM receiver, for my in-ear monitoring system for my band. And for that purpose, it seem to work pretty well. There is a power switch on the front, but there is no LED or other light to indicate that the device is on. Good design for saving batteries during use, but certainly, it could be accidentally left on, which would waste batteries pretty fast. Both the frequency tuning and the volume controls are manifested as wheel controls on either side of the device. These wheels are fairly easy to control, and the frequency wheel moves a sliding indicator on the front, which obviously lets you know what the current frequency is at. It's too bad the tuner couldn't be digital, as I usually have a very hard time dialing in the current frequency of my FM transmitter. The number line display here just isn't that good.

The Walkman uses a single AA battery, which is convenient and efficient, and lightweight. There is also a DX/Local switch on the side of the unit, which can change the range of the FM antenna range. I notice no difference in either one, and it seems like an unusual feature that I've never had on other radios. The SRP-59 also sports a convenient belt clip, so you can even wear it just like a fancier professional in-ear monitoring system. And that was the goal all along, it seems!
Did you find this review helpful?yesno
Cookies help us improve performance, enhance user experience and deliver our services. By using our services, you agree to our use of cookies. Find out more.