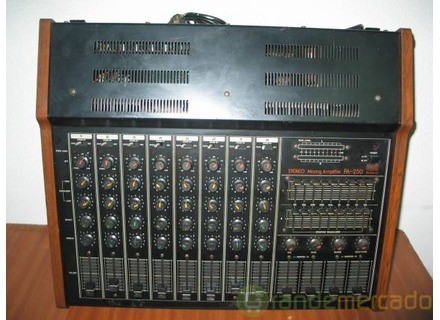 Value For Money : Correct Audience: Advanced Users
I found this mixer by pure chance at a secondhand market two years ago, its big, white-on-black Roland logo had aroused me among all the stuff that surrounded it.
According to the seller, it had belonged to his father who used and abused it for parties in the country.

Beware, it weighs a ton! I had to get a Uber to get back home with it!

It’s an 8-mono channel mixer, each with a basic (low/high) EQ, an output gain control and an FX section (delay & reverb generated from aspring reverb within the table).

When I got this, I mostly had non-analog, mostly digital gear, such as Kork/Elektron (which can sound a bit cold sometimes) and this mixer mostly helped me to bring their sounds alive.
It’s perfect to warm sounds up, it adds a bit of analog dirt to anything that goes through it.
Sprinkle the whole with the adequate amount of internal FX or even distortion by getting it into the red and a metallic-sounding synth turns into a LO-FI organic beast (ala LIES Records/ Lobster Theremin/ MORD etc).

A real pleasure, but definitely not for someone looking for a neutral-sounding mixer that would provide a neutral sound without a hiss or hum.
It blows, spits and distorts sounds if you want it to – in a word, it sounds alive!