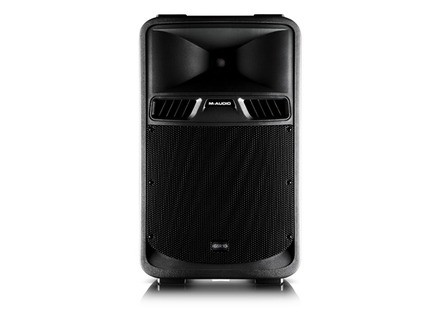 «  A product unpretentious but did the job! »
5

I'll try to be brief and objective as possible, a topic on the forum already dealing with long, wide and across ^ ^

* ERGONOMICS
For me it is faultless, you can do anything! :
- The overall finish of the product is very good (and not the logo off unpacking for me ^ ^)
- Class D Amp + HP and neodymium compression -> they are light!
- Two side handles and top handle
- Several ellipsis available
- To have the ground or speaker stand, stacked (2 max) position and back stage.
- Detail which I believe is of importance, the controls are recessed back and do not exceed the enclosure. It avoids accidentally hang (and damaging them!).

* SOUND
- The rather low bluffing, especially when we know that HP is a "small" 10 inches, with a rendering farm stand very well to an average +
And beyond the limit of the clip on securities low it can become a bit "mushy" less coherent.
But every time I use it (especially when it's at home) it amazes me!

- A medium rather well balanced, fairly present itself. Nothing in particular.

- The highs are the only downside that most people have raised. No, they are not flashy, but rather a bit veiled. However, a correction (rather light for that matter) is sufficient to find the hint of shine and clarity missing

In the evening it can be seen as an advantage, they are naturally not agressantes.

Power: far from being ultra powerful (when compared to the upscale 2x more expensive), the output level of available full-range mode is still not bad, especially as the heating of the amp remains moderate even at full speed.
Great for home, evening cocktails and small rooms if not sub.
As already said, if you have a sub simply activate the filter that cuts progressively under 70Hz. The power saved on the grave can push more.

For presets, I use only the "normal" or "voice" if used with a single microphone. The rest of the musical message too distorted for me ...

I would not have ever bought without doubt if I did not need, and if they were not (very) large coupon Thomann compared to the competition.
Is neither a "kikoo" super happy overall Kool Sound loud and hollow, or a professional sound system (which I totally respect the opinion), I do not regret my purchase!

I note though that my rating is weighted price obtained!
At its original price, I would have less ...
See the source
Did you find this review helpful?yesno
Cookies help us improve performance, enhance user experience and deliver our services. By using our services, you agree to our use of cookies. Find out more.