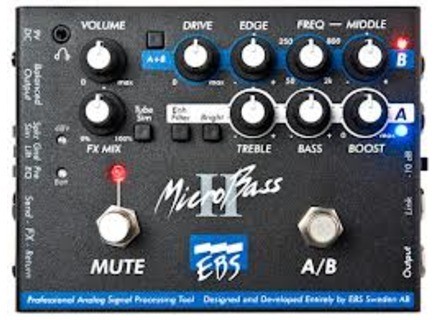 View other reviews for this product:
Small metal box no bigger than a like effect or electro harmonix SansAmp Bass,
it uses analog technology.
this pedal is a good preamp manufacturing and of course a good fame.
the connectors are numerous and well thought out, very pro for such a small box (2 in bass, effects loop, XLR output, a link, a headphone ...)
Finally, this pedal offers configurations, both simple and complex to use if you want to push the envelope further ...

First complaint, the record which is not very useful, but which is in English and not very clear.
We do without them, the general configuration is based on two different channels and there's really more that I have seen elsewhere on this type of pedal (amp)
Indeed, a channel that plays on medium settings and the ability to create distortion, and B plays the treble and bass boost with an adjustable on the same channel and master volume for the 2.
As you can clearly make two different sounds plus a noise level which is different monster for example passages slapper. Very practical, the game channel does not stop there, they can also be addition on and there we find a very complete set.
There are a range of next switch used to play on some frequencies donneent additional opportunities telqu'un simulator lamp, for example ...
Very complete, this box is very accurate in these settings to the image of his amp and you really have to be light on the pots so as not to create a sound envelope too rich and take the place of other musicians.
Finally, there is a switchable mute the foot, I thought at first that it was "zel" made by the manufacturer and ultimately it's quite convenient.

The sound is once again the image of the brand very professional but also less roots than other brands which cost him making comments such as "the sound is cold" for me, the sound is very modern if 'playing with the preamp but much respect to the side of my vintage instrument, all the same and the grain is there.
The panel is quite big opportunity and I took the risk to say that this preamp also undoubtedly more expensive rack.
In my case, I bought this after trying the boiboite tech 21 (a reference in the field) and the idea of ​​leaving with the Sadowsky. Ultimately, I would prefer this pedal is the best time or at least more complete and more convenient than the competitors.
Finally you can play with this stuff all with it without amp directly into the console, the sound is very professional. Of course with an aditional amp is ajusqu'a 3 setting options that you can switch to a foot for pieces which for me is a first for this type of stuff.

I have been using less than 48 hours, but it was already 4 o'clock with months of testing in my room and two concerts on two evenings, with and without my amp which is itself an EBS and a traditional Jazz Bass.
I was looking for more configuration can be switchable according to the pieces, but I wanted to keep the quality of my EBS amp that sounds the fire of God .... I served, there was no better. (In this price range)

Finally, finally, I'd be mean but I would recommend for future achetteurs, of this brand or another not to proud sellers of Pigalle that are Ramme, and preached to their parish. None of them said the same thing, some n'on not even read this stuff and still critical, I was almost seduced by the tech 21 if you can try this one, and I do not regret having changed mag to try it anyway.
Its price is 350 euros in a bit expensive but it's good here is EBS sells racks at the same price TElement is good.
See the source
Did you find this review helpful?yesno
Cookies help us improve performance, enhance user experience and deliver our services. By using our services, you agree to our use of cookies. Find out more.