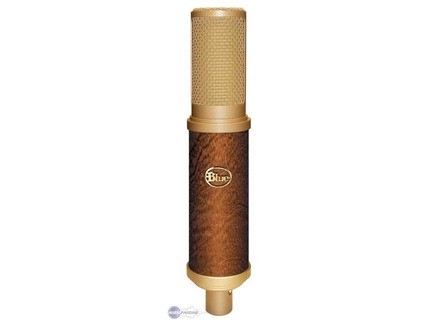 Woodpecker, Ribbon Microphone from Blue Microphones in the Signature series.

View other reviews for this product:
Blue Microphones' Woodpecker is a unique designed ribbon microphone that can be used with any type of preamp.  It has a pretty high output for a ribbon microphone and is best suited in the recording studio since it still is a ribbon mic.  The mic has a figure eight polar pick up pattern and will pick up frequencies between 20 Hz and 20 KHz.

I only first used Blue Microphones Woodpecker about six months ago in a recording studio and upon first use I immediately liked what I was hearing.  While the mic definitely has a ribbon sound to it, it has a much cleaner sound than most ribbon mics and isn't exactly a traditional ribbon sound.  I've used the mic to record female as well as male lead vocals and found that the mic brought something to the table for both of these applications.  While I wouldn't say that it would be the best choice for recording vocals, for some people's voices it works quite well; the trick is figuring out which voices will work well with it and which ones won't.  While I'm sure that it will work well with other acoustic instruments, I can't say which for sure as I haven't yet had the chance to experiment too much with this microphone.  Like all Blue Microphones, the Woodpecker is very well built and will last a long time as long as you treat it right.  It is also bigger than most microphones out there, but it comes with a shock mount that will keep it in place well.  The price of the mic is definitely right and is a great deal for anyone looking for a high quality ribbon microphone at a good price.  Overall, my favorite aspect of Blue Microphones Woodpecker is that you are getting a true ribbon microphone without the low output level and other problems that come with more traditional ribbon microphones...