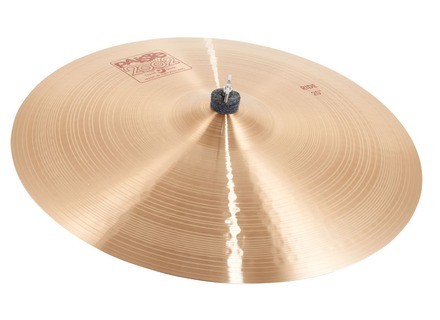 Buy this productView price information >
View other reviews for this product:
Our drummer just bought this cymbal, and I am very impressed with it. While it isn't mine, I do practice with my drummer 2-3 times a week in addition to gigs, so at this point I'm really familiar with it, especially since it's being used by a far better drummer than myself. It is 20" and isn't too thick like a lot of new ride cymbals tend to be. This is probably because it was used, and had been worn in really well, but this was no matter as the cymbal sounds fantastic. It has a nice, rich tone for a ride, bright enough to hear through a drum mix but dark enough to add character. It is labeled a jazz ride, but I really like the sound that my drummer (and I) get through it for a rock band. In fact, I'd probably go with something else for jazz, honestly.
I like the character that this cymbal adds to the DW kit that my drummer uses. It allows us to get more of a subdued, subtle sound out of that rocking, loud kit. The bell is loud and clear, with a great fat tone. Crashing the ride can get loud, but it works well in the context of our group. Playing it in the more traditional soft manner is pleasant, as it is light and airy but fat enough that you can really feel its presence.
I think that my drummer got a great deal on this cymbal. It's certainly going for much more than that new, even though it probably is better when it's been worn in a little bit. It's not quite on the level of some of the K custom rides, but it's also a lot cheaper. This will make a fine addition to your cymbals if you can get it at a good price, and will be a useful color in your palette.