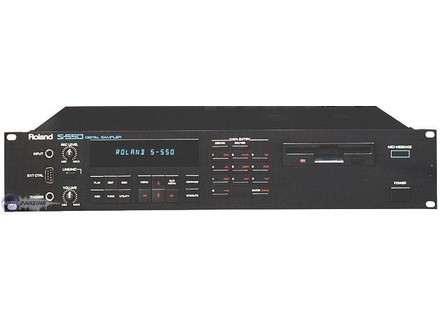 Oh here's a sampler ba vintage, real!
C is the correct 12-bit
Polyphony of 16 voices that are returned as you want and very simple since the main screen (handy for the best use of its resources)
It takes four blocks of 7.2 sec each has 30kHz (28.8 sec in total) and this can be doubled to 15kHz.
8 out of home (I think) if not output color display and monochrome, the trio is twelve o'clock
As the S-330 it works with mouse and screen.
There are versions with scsi

C is the correct 12 bits very effective on the ground (to thicken) or obviously beats.
Not convenient in terms of programming (language roland s epoch), but rather pushed to the level of the edition (possibility to design their own forms of waves for example).
The manual is very complete but a victim of language roland (sample and programs are called 'tone' and 'plots')

Warning machine type!
It's a characteristic of 12-bit dull and very large ASEZ
The filter is also friendly, low pass with resonance, but it is only bold as it should ....

It was my first bike and t I got the teeth on it.
In sound is unmistakable and well equipped (with Desktop Edition is happiness c).
A true vintage sampler with a real personality.
At the user is boring on one point: the bone on two floppy disks and juggle the disk 'utility' and the tired bones disks (make copies of your system disks).
If there was the same sound and a screen on a mpc, I'll buy the most direct can be found at a cheap given that c is a machine unknown.
See the source
Did you find this review helpful?yesno
Cookies help us improve performance, enhance user experience and deliver our services. By using our services, you agree to our use of cookies. Find out more.