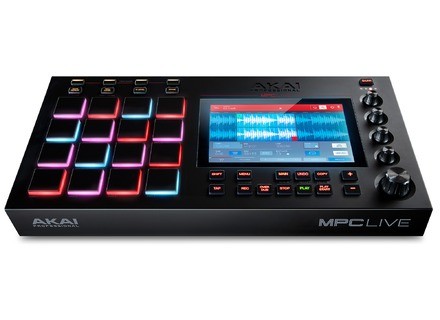 « A well-conceived, efficient and inspiring device »
4

Value For Money : Correct Audience: Anyone
Buy this productView price information >
I wish I could have given it 4.5 out of 5, but as you can’t give half-stars… I’ll go with 4, as it’s still perfectible!

After using it for a few days, I think I can deliver a review on this MPC Live and the said review is all the more positive!

First, the promise to get a real standalone gear, like in the good ol’days BUT with modern features (touchscreen) and high capacities (RAM Size, SSD, USB3…), is kept. This was the most important question to me, and I must admit Akai really did the job. It features 2GB of RAM to load samples (which is LARGELY Enough), and yesterday I mounted a NTFS 120GB SSD spare drive that I had, so I could put my entire samples collection + many others, and I have plenty of room left (with no need to reformat anything). It was immediately recognized and you can browse it as easily as you would do on your computer.: very practical for those who like to use their directory tree to organise everything.

Then come the sounds. Frankly, I consider it a clear round: full, punchy, warm sounds are here, I’m almost surprised as I expected a more neutral/cleaner converter output so that’s a nice surprise. You can even overdrive it all and have to take care (if need be you still can lower the master level setting in the internal mixer to avoid having the output overdriven). Oh, by the way, the headphone out is really punchy, so no chance you’ll find the sound too thin when monitoring on your headphone, even if it features a high impedence (too bad the connector is a small 3.5mm instead of the usual 6.35 that is usually featured on pro studio gears).

The device itself is a bit on the heavy side (well, you can’t blame it for that, it shelters a computer and battery), but it seems designed to last. Quite sturdy, plus it’s good-looking – well, that for one is a question of taste. Its dark/matt/sturdy side is nice in my opinion. No noise can be heard when activated (silent supply, you really have to put your ear just next to the Live’s left panel to perceive a very discrete high frequency – it seems to be using a fanless technology), so you can quietly work in a quiet environment. The battery lasts the promised 5 to 6 hours with no problem. What a bliss to have such a device which you can take anywhere with just a headphone to make sound where and when you feel like to!

The sample tweaking is rather well done, you can easily set the start/ end/ loop points where you want, it’s quick and there’s even a zer-crossing option available. Such editing modes are not totally dynamic though, and you can’t modify a loop point while keeping the pad pressed while having the position changed: the pad has to be retriggered to hear the change (to be added to a future update wishlist). On the sample editing screen, you can have a horizontal zoom by pinch or QLinks, while in the piano roll you have to use your fingers – but you soon get used to it. Ergonomically, the QLinks are a welcome surprise as while they do have a default function on each of the OS’s page, they can be customized at will to do whatever you want. In a nutshell, you have 16 knobs available (4 in each of 4 pages) and you can assign each of them the function that you want assigned to it.

Another very good point is the possibility to change at anytime the starting and finishing bar within a pattern (that they call “Sequence”), which is very practical to go and correct a precise part (especially if using a long pattern) without requiring you to listen to the entire pattern – and this is a non-destructive feature (you put the starting point back to bar 1 and the end to bar 8 and here we go!&gt; back to the entire pattern getting played) .

The way a song is organized can appear quite obscure at first, but once you’ve found your feet and understood the device’s underlying logic it’s a real piece of cake (as it often is). The internal effects are rather efficient (including the distortions/overdrives from which I didn’t expect much usability, while in the end they do the job – provided you take the time to set them up correctly). The reverbs do the job too, but they lack stereo width, which is a pity but should be within reach of a further update. As for delays: once set properly, the Stereo Delay does its part; there are several delay types, and although none of them is really exciting (I got used to mu Strymon TimeLine…), you can stack two of them for a more complex delay effect.

The RAM space taken by the samples in a song can be checked (those unused can be purged in a blink), as well as the global CPU usage. However, there’s no detailed “per-FX” view so as to detect which of them are the most CPU-hungry. Regarding effects, a very good news is the fact you can put these in Aux (with a total 4 aux buses available on the master) or insert. In the latter case, plenty of opportunities are provided: on the pad alone, on the bank, on the channel… and that’s great!

. Another real good news if you want to stack many effects on a pad: resampling of a pad or sequence with effects so as to free CPU is easy. There are resampling features at all levels where it can be needed by the way, so as to avoid slowing the workflow down.

Once connected to the computer, the Live instantly recognizes all VSTs and allows to access all plugs. Since it features a sound output, its own audio engine will work as a sound device! (unlike Maschine for instance, which requires an additional audio interface). What’s cool is that you can easily take a stem that contains a VST plug-in applied to the sample, then unplug the device and get back to standalone. That’s where the “best of both worlds” aspect is plenty efficient. Akai’s software is not without faults, but as a whole it does the job. So far, I haven’t spent enough time on it so as to have a real advice, as the standalone mode is what I’ve been most interested in until now.

Regarding its teething problems, which we can expect at least some to be addresses through the device’s future OS versions, the following points can be noted:
- no current tempo-adjusted loop preview (or at least I still haven’t found how to do it)
- no native crossfade within the loops
- no granular synthesis on samples (that would be huge !)
- the filters do the job especially at extreme settings (low-pass & high-pass), but they’re not very musical at intermediate values in filter-sweeping mode (if only we could gat back to the sound of the E-Mu filters…). It is particularly necessary to go softly on the resonance setting, or it will crack awfully. But you still have plenty of filter to choose from…
- no proper modulation matrix : sources and their destinations are fixed and very little in number, so it’s a minimal service so far but those which are already implemented already allow to bring the samples to life.
- the automation can only be edited while the device is connected to a computer, unless you use one of those tiresome tricks. Another teething problem.

In the end and in spite of its faults, there’s a real pleasure in the ability that it brings to be able to make whole songs outside of a DAW (goodbye you MOUSE!!), as could be expected. It provides more pleasure, sound quality and efficiency, and I’m eager to try its audio functions when recording a guitar or bass part

I’d been lucky enough to have an Elektron Octatrack for 2 years in the past. A very good device, but really electronic music-oriented (and not even all styles, but it does the job if you’re into house or minimal). When Akai has implemented a proper automation (especially in standalone), or even a P-Locks system such as that which Elektron users know well, we will have a superb machine able to satisfy all musical uses and expectations.

Here we go, that’s a rather positive overview and with a little luck it may even get better with the internal OS and software’s future updates (which seem to be one single object developmentwise, if I understood correctly).

But i twill have taken a looooooong while

before Akai finally woke up and provided us with a machine that is both 100% standalone (up to its supply mode), while being able to use all that makes a computer’s power (VST/AU/RTAS) when connected to it so as to potentially go back to standalone

, filled with nice sounds, but it was worth the wait. Now we’ll see how the software part evolves, as it’s far from perfect (I forgot mentioning a few bugs here and there), but nothing too bad.

How pleasing to get back to standalone and be able to make sounds lying on a couch with a good old DT-770 on your head… and how pleasing it is to finally get rid of this horrible mouse/trackball/pad to concentrate on what really matters: the sound. And this little Live frankly has a lot of it to offer – and it’s everything but small.

[edit after using it for a month and a half]

Now the Live has become a central piece in my setup. Now, when I want to work with a VST I don’t even bother turning on the Akai software and I stay in standalone mode: I simply load the VST in my favourite DAW (which happens to be Reaper), then I only have to enter the MIDI parts directly in the Live’s sequencer (and since class-compliant USB devices are recognized, you can use a small auto-supplied USB controller such as a MIDI keyboard for instance – but it can also be done through the classic MIDI port). Once satisfied with the result, here you go – sample it to the Live and, voila! The workflow if plain awesome as you remain in a standalone environment, why bother with a mouse and PC for something else than loading your favourite plug-ins?

Using it, I realize I use my external pedals much more than before: all you have to do is use the 3/4 outputs and take back the effect’s output. What’s cool is that separate outputs can be affected PER PAD, making it possible to send all the pads of a drumkit to 1/2 EXCEPT for the snare that you’ll route to 3/4 to put a great hardware reverb (such as a Strymon Big Sky, for instance

) ). So you just press play and listen immediately listen to the outcome, in-context, allowing you to tweak the reverb’s sound at will in real time. You’re just a little sampling away from replacing the sample, re-routing the pad’s output to 1/2 and here we go!

In a nutshell : I’m still happy with it, even more than ever. It’s really the small machine that I had expected for long. I still can think of a few improvements that would make it an even more lethal soundweapon:
&gt; automatable editing (so far in standalone mode all you can do is erase or overwrite)
&gt; real-time listening to the loop points (so far the pad has to be retriggered)
&gt; Crossfade looping
&gt; Granular synthesis