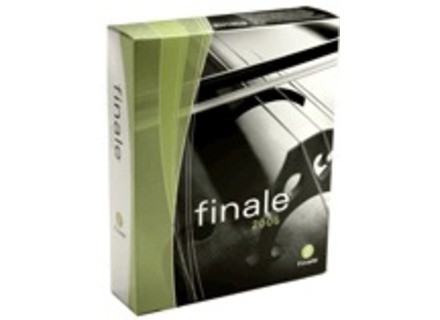 Product replaced by the MakeMusic Finale 2014.

View other reviews for this product:
Finale is quickly becoming, if not already, one of the most popular music notation programs on the market today. My college used it exclusively, as are many universities and conservatories around the world. I didn't have a really hard time setting it up, as long as your MIDI controller/keyboard is in order, and you read how to make it work on your computer, you really shouldn't have a problem. The setup isn't too crazy, though it's a bit more intense than your average software setup because of the MIDI issues. The functionality of the program is a chore at first. This is definitely a program that takes some getting used to, and it will frustrate even the most musically knowledgeable people with how complex it is.

As annoying as the program is to use at first, it's arguable the most detailed program I've used for notation. I've never been too happy with some programs, since their playback hasn't been able to accurately reproduce what I've composed. Finale is pretty good about this, and they also have the most detail-oriented approach that I've seen. I'm able to add any touch to the music at any time, and eventually, after all the shortcuts have been learned, it gets done pretty quickly. The gear does tend to have problems on occasion; sometimes the MIDI won't sync up well at all, and the interface doesn't get noticed by the computer on occasion. The performance overall, though, is pretty good.

I like the fact that this notation software accurately represents your compositions in its playback, and that it has so many features that you can use in your notation. I have tried Sibelius, and while I initially preferred that program due to it's simplicity, I would have to recommend Finale for people who really need quality sheet music with more detail and elaborate functions. I think that the tones that come with the software are pretty weak, but buying a plug-in or two tends to rectify that problem, as there are some pretty decent sounding plug-ins out there. I think that Finale is pretty reasonably priced, especially if you are going to make money off of your work, in which case Finale will more than pay for itself, simply because your productivity over time will increase. I would certainly recommend to composers and copyists alike. I personally don't use it enough to say that I'd buy it again, but I'm sure that down the line I'll have more use for it.
Did you find this review helpful?yesno
Cookies help us improve performance, enhance user experience and deliver our services. By using our services, you agree to our use of cookies. Find out more.